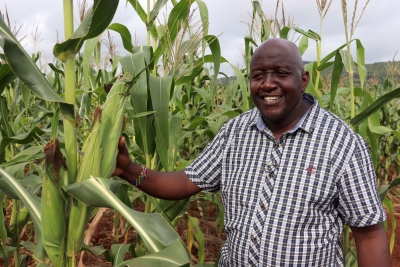 MAKUENI, Kenya (PAMACC News) - Justus Kimeu, a resident of Kithiani village in the heart of Makueni County has demonstrated to his villagers that by using innovative agronomy practices, the little rainfall in the semi arid county can be sufficient to produce sufficient yields of maize and other crops.

Kimeu is one of the farmers who have embraced the Regenerative Agriculture (RA) technique, which is being piloted in the county by AGRA, the Cereal Growers Association (CGA) among other partners.

RA is a dynamic and holistic way of farming that involves all the principals of permaculture and organic farming techniques, such as minimum tillage, use of cover crops, crop rotation, terracing to reduce soil erosion, heavy mulching to keep the soils moist, use of basins to preserve water and use of compost manure to give the topsoil a texture of virgin fertile arable land.

According to Dr Agnes Kalibata – AGRA President, putting nature at the heart of agriculture and land management can unlock huge benefits for people, health and the environment.

“Productive and regenerative agricultural systems that combine local, indigenous and traditional knowledge and techniques such as crop rotation and tree planting with advanced farming technologies like drip irrigation and seed selection can increase yields, reduce input requirements, boost transparency, and improve the incomes and livelihoods of smallholder farmers,” said the AGRA President.

“The RA system is actually returning the topsoil back to its original form,” said Michael Mutua, an Associate Program Officer in charge of Regenerative Agriculture at AGRA.

With a dismal rainfall of 250mm to 400mm per annum, Kimeu’s one and a half acre piece of land stands out in the entire village. The deep green maize crop with two to three cobs per stem is a rare spectacle in this rainfall scarce. Under normal circumstances, such a crop can only be found in Western Kenya and the Rift Valley regions which receive more than 1250mm per annum.

“When I decided to implement this technique, my farm was bare without much vegetation. So I started by making terraces and after it rained, different weeds sprouted. Together with my family members we uprooted all the weeds and left them on the farm to dry and decompose before making small basins in which we were going to plant the crop,” explained the farmer.

The basins were then filled with organic manure and some topsoil. And when it rained for the second time, hybrid and drought tolerant maize variety seeds were planted inside the moist basins, and any weed that sprouted was manually uprooted and left to rot on the farm.

“We try as much as possible to avoid tillage or any form of disturbing the soil for it to regenerate naturally to its original form,” he said noting that he also avoided use of convectional fertilizers on the farm.

According to AGRA’s Mutua, basins filled with manure can conserve soil moisture for a very long time. As well, compost manure releases soil nutrients slowly, thus keeps the soil fertile for a few seasons unlike the convectional fertilizers which must be used in every planting season.

RA farming system is currently being piloted among smallholder farmers in Makueni and Embu Counties before it is rolled out to other parts of the country and even beyond Kenya.