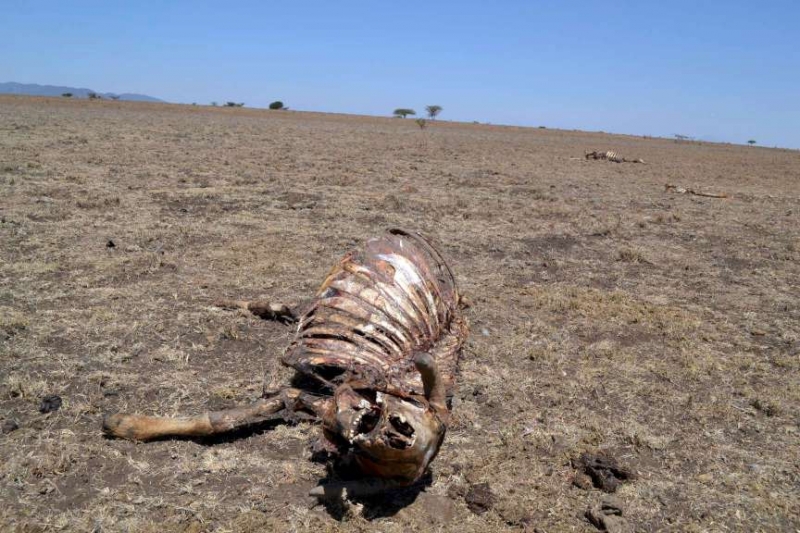 NAIROBI, Kenya (PAMACC News) - A recent study by scientists from the Kenya Markets Trust (KMT) has shown that temperatures in all the drylands had risen in the past 50 years, with devastating impact particularly on cattle and some food crops.

These findings coincided with a new report by the UN Food and Agriculture Organisation (FAO) released on the same day showing that the world is off track to meet most food and agriculture-related Sustainable Development Goals (SDG), with more than half of local livestock breeds at risk of extinction.

“In all the 21 counties, we observed a 25.2 percent decline in cattle population between 1977 and 2016 on average, with Turkana County alone recording a devastating loss of about 60 percent in the same period, and this is directly linked to the increased heat,” said Dr Mohammed Yahya Said, the Lead Investigator and a consulting scientist at the KMT.

These findings correspond with the FAO global report which shows that on average, 60 percent of local livestock breeds are at risk of extinction in the 70 countries that had risk status information. “Specifically, across the world, out of 7155 local livestock breeds, 1940 are considered to be at risk of extinction. Examples include the Fogera cattle from Ethiopia or the Gembrong goat of Bali,” FAO reported.

It notes that this could be even higher as for two thirds of the local livestock breeds, especially in Africa, the Middle and Near East and Asia, there is no data on the animals' risk status.
According to Dr Said, changes in temperatures in Kenya are directly responsible for reduction of cattle population. “Our study found out that five counties have already surpassed the 1.5˚C mark, and such high temperatures are never good particularly for livestock,” he said.

The counties with the highest rise in temperatures include West Pokot and Elgeyo-Marakwet counties, which have recorded an increase of 1.91° C in the past 50 years, while Turkana and Baringo have both recorded (1.8° C) increase, Laikipia (1.59° C) and Narok (1.75° C) in the same period.

As a result of such occurrences, FAO reports that hunger is on the rise in many countries worldwide. “More than 820 million people are still hungry today,” says the report.

Further, according to the UN, small-scale food producers - who represent the majority of all farmers in many developing countries - face disproportionate challenges in accessing inputs and services, and as a result, their incomes and productivity are systematically lower compared to larger food producers.

Even more badly, the UN report also warns of "no progress in conserving animal genetic resources and notes that ongoing efforts to preserve these resources appear inadequate". For example, less than one percent of local livestock breeds across the world have enough genetic material stored that would allow the breed to be reconstituted in case of extinction.

However, the conservation of plant genetic material was found to be faring on somewhat better.

At the end of 2018, global holdings of plant genetic materials conserved in gene banks in 99 countries and 17 regional and international centers totaled 5.3 million samples - a nearly three percent increase over the previous year. This is mainly due, however, to the transfer of existing materials to better, indicator-compliant storage facilities, rather than a reflection of newly added diversity collected from the field.

Efforts to secure crop diversity continue to be insufficient, caution the report, particularly for crop wild relatives, wild food plants and neglected and underutilized crop species.
However, according to KMT scientists, there is evidence that the Arabica coffee for example is getting extinct in Kenya and Ethiopia, while the yield from Robusta variety is going to more than double by the year 2050.

“These are very important findings for the country especially now that we are working towards the realization of the ‘Big Four’ development agenda,” said Mwangi Harry Gioche, the Director of Agriculture Research and Innovation at the Ministry of Agriculture, Livestock Fisheries and Irrigation during the dissemination of the findings of the Kenyan study.

This tenure transition has been driven by a number of factors including land tenure reforms, and market and demographic changes. Population pressure is also creating more consciousness around land in the ASALs and this is translating into emerging tensions around ownership and use. Options such as integrated land management can help take into account both pastoralists’ needs, as well as emerging forms of more intensified livestock investments by establishing land use zones that allow both free movements of large herds as well as livestock intensification under private land tenure. Land zoning can be facilitated through appropriate enabling policies and spatial planning processes.

Such integrated frameworks should provide security to pastoralists and enable them to negotiate for various financial, livelihood and technological opportunities in light of climatic shocks and changing tenure regimes.