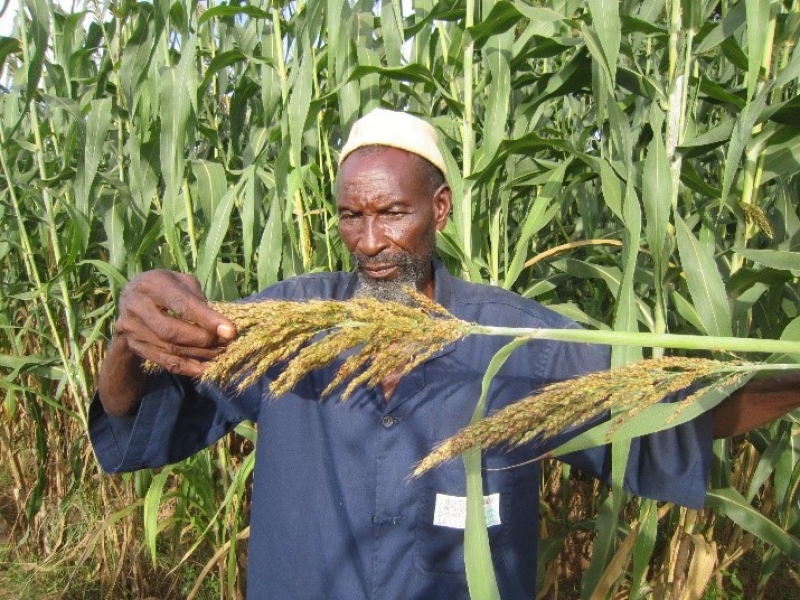 Sorghum is the fifth most produced grain globally.

This two-meter tall plant from the grass family is often grown in regions that have high temperatures and lower rainfall. In wetter regions, its production is lower than that of more lucrative crops such as rice and maize.

Sorghum is a particularly essential crop in Africa, second to maize, as the staple grain for millions of people.

Although it is mainly consumed as a grain, sorghum is also prepared into a wide variety of other food products such as porridge, bread, lactic and alcoholic beverages, and weaning meals.

Sorghum is the main cereal crop grown in Burkina Faso, with more than 1.5 million hectares. Along with pearl millet, it is the staple diet of rural populations in the Sub-Sahelian regions.

In spite of various interventions, its productivity remains low, with an average yield of approximately one tonne per hectare. Many factors have contributed to the decreased productivity, including demographic pressure, ecological degradation, loss of soil fertility, and water erosion.

The Sahel as a bread basket

To address these constraints, and with a view to transforming the Sahel into a bread basket, the African Development Bank (AfDB), in 2018, launched the Sorghum and Millet Compact of Technologies for African Agricultural Transformation (TAAT).

The compact, according to the bank, spearheads the bold plan to transform Sorghum and Millet in Burkina Faso, Mali, Niger, Nigeria, Senegal, Sudan and Chad.

TAAT’s main objective is to improve the business of agriculture across Africa by raising agricultural productivity, mitigating risks and promoting diversification and processing in 18 agricultural value chains within eight Priority Intervention Areas (PIA).

The programme increases agricultural productivity through the deployment of proven and high-performance agricultural technologies at scale along selected nine commodity compacts which include sorghum and millet.

With sustainable intensification, improved profitability of sorghum and millet; and the scaling up of proven technologies as areas of focal emphasis, the TAAT sorghum and millet compact set out to work on contributing to food and nutrition security in a region where low agricultural productivity and lack of value added are among the main causes of malnutrition, unemployment and poverty on the continent.

Led by the International Crop Research Institute for the Semi-Arid Tropics (ICRISAT), in collaboration with National Research and Extension Systems, the sorghum and millet compact targets about 40 to 50% of African farmers with technologies relevant to boosting agricultural productivity and self-sufficiency by 2025.

During the 2019 rainy season, the compact, in collaboration with the TAAT Water Enabler Compact (TAAT-WEC) selected Burkina Faso and Mali to host the demonstration of climate smart technologies.

The technologies identified for the demonstration are Zai, Half-moons and Contour Lines Technique. These are mainly soil and water conservation technologies.

Zai refers to planting pit dug in degraded land, amended with organic manure which is meant to collect run-off water and restore the productivity of the soil.

Sorghum or millet seeds are planted in the pits.

Half-moons on the other hand, form structure made in degraded land and amended with organic manure which collects run-off water and is planted with sorghum or millet.

Zai pits and half-moon ditches can increase yields even in the first year. The farmer does not need to wait for the land to fully regenerate before sowing.

The soil remains bare between Zai pits, but inside the hole the earth is damp and fertile. The pit collects and retains moisture and prevents the rich soil and seeds from being washed away by the rain.

These technologies were displayed in Burkina Faso using the famer field school approach, while the contour lines technique (CLT) was presented to farmers in Mali using the demonstration plot approach.

Contour lines technique refers to lines of stones installed on degraded land following the contour lines. They are meant to reduce run-off and spread run-off water in the field.

In both countries, abandoned bare lands, which traditional famers believe are not suitable for cultivation, were used with the compact selecting the sites and the relevant crop varieties in both cases.

According to Dr Dougbeji Fatondji, TAAT Sorghum and Millet Compact Leader, “the objective of this activity is to demonstrate to the farmers, technologies that can help them produce and increase crop productivity under the current weather variability and climate change conditions.

Kapelga, a sorghum variety (white grain and early maturing) was used in the district of Toma. It is a variety that is under promotion in the province and beyond by Federation des Professionnels Agricole du Burkina (FEPAB).

In the district of Boussoma, ICSV1049 a variety promoted in the Sanmentenga province was used.

The two sorghum varieties were selected based on the agro-ecological characteristics. Planting was done on the same day at each site.

In Toma, the field was managed by FEPAB (25 farmers with 9 of them being females) and in Boussouma it was managed by 30 farmers – 13 females and 17 males.

Two field days were organized in each site, during heading and during maturity stages.

The second day of the farmer field school presented an opportunity to harvest and estimate with farmers, the yield of the different technologies.

In Sorofing, one of the selected villages, the TAAT Water Enabler Compact (TAAT-WEC) trained farmers on how to design the contour lines by automatic reading method.

Mr Dramane Male, a farmer applied the CLT on 2.0 hectare of Fadda. Despite the end of season’s drought, the plants remained green with good soil moisture.

Dramane said that the CLT stopped the runoffs.

“If this were to be the traditional method in a similar rainy season, I would have lost all my crops because of drought,” he added. He promised to apply the CLT in all the areas of his fields with pronounced slopes.

On the 0.5-hectare, Yaya Male, another farmer, applied the CLT, the plants are well developed with big stems and green leaves.

A field day was organized at Foh to showcase the performance of the demonstrated technology to farmers.

About 10 research and development institutions including a private seed company and many farmers were represented at the event which was covered by Office de Radiodiffusion-Télévision du Mali (ORTM), the country’s national television station.

During the visit to the plot of Pierre Diarra in Kourouma, Dr. Kalifa Traore, from the Institut d’Economie Rurale (IER), explained the methodology deployed – from farmers’ sensitization to training and practical exercises on the CLT.

In addition to the proposed variety (Tiandougou Coura), the farmer used his own local variety to see if the crop performance was not linked to the varietal differences.

The results were self-explanatory and amazing. The plot under CLT produced good plants with large panicles compared to the control (low plant stand due to runoffs).

“I usually abandon this particular field because of the runoffs,” Pierre Diarra said.

“With this exposure to the CLT now, I promise to apply the CLT in all problematic soils for all crops,” Pierre aded.

The local authorities led by the Deputy Mayor, Michel Traore, thanked the team for the technology deployed in his community. He equally called for continuous support aimed at taking the technology beyond borders.

On his part, he promised to include the CLT technique in their local Development Plan (PDSEC).

Participants from other communities also requested for similar training on CLT. This elicited a positive response from farmers organizations Platform (AOPP) and the local Chamber of Agriculture (CRA) who pledged to organise more training sessions in collaboration with the TAAT programme.