Food security champions named among the most reputable African personalities 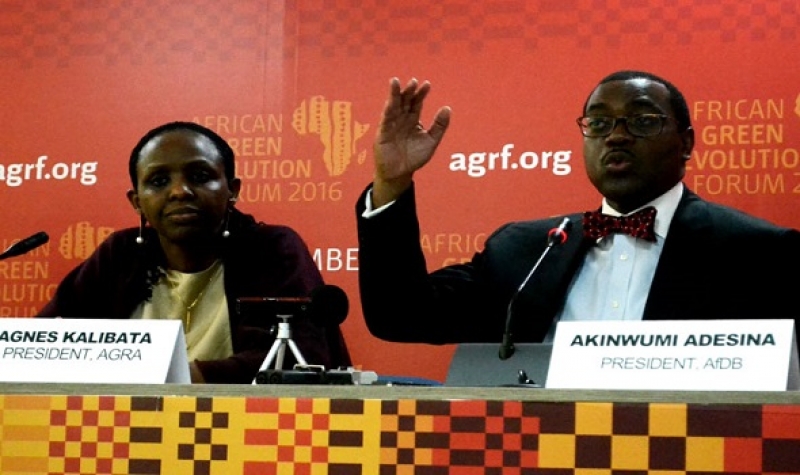 Dr Kalibata and Adesina during an event in Nairobi, Kenya

NAIROBI, Kenya (PAMACC News) - Two pan African champions for a food secure Africa have been named among the 100 most reputable people on earth and most reputable CEOs on the continent in the year 2020.

Dr Agnes Kalibata, who joined the Alliance for a Green Revolution in Africa (AGRA) as the President in September 2014 has been working closely with public and private partners to ensure a food secure and prosperous Africa through rapid, inclusive, sustainable agricultural growth, improving the productivity and livelihoods of millions of smallholder farmers in Africa.

Likewise, Dr Akinwumi Adesina, the former Minister of Agriculture and Rural Development for Nigeria, and currently the President of the African Development Bank (AfDB) since May 2015 has been a champion of the ‘High Five,’ which is a five tier point strategy to Light up and power Africa, Feed Africa, Industrialize Africa, Integrate Africa, and Improve the quality of life for the people of Africa.

Both Kalibata and Adesina have shared several panels in different forums with a common message, that Africa can feed itself, and as well, the continent can become a net exporter of food. They have constantly pushed for investment in smallholder farmers, women and the youth.

In one of the forums – the Korea-Africa Economic Cooperation Conference, Dr Kalibata pointed out that it is important to “invest in modern technologies and give the youth and women more resources to venture into productive agriculture.”

Her sentiments were echoed by Dr Adesina, who said: “To achieve food sufficiency and turn the continent into a net food exporter, Africa must empower smallholder farmers, who constitute 70% of the population and produce 80% of the food consumed in the continent.”

The two leaders were mentioned through a Reputation Poll, known globally for its annual ranking of the 100 Most Reputable People on Earth and Most Reputable CEOs in various countries.

Dr. Kalibata said she was “thrilled to be included among this list of African changemakers. My inclusion in this list is due in large part to the excellence of the team and partners I have around me who believe strongly that change can and will come to African agriculture.”

Under her leadership, AGRA is working to increase the incomes and improve food security for 30 million farming households in 11 African countries by 2021 through targeted investments to strengthen three core areas: Support to institutional capacity and a stronger policy reform environment; Stronger input delivery systems in agriculture: and Growing public/private partnerships for inclusive agricultural growth.

Other leaders on the list who have made noticeable impact in terms of food security in their countries include H. E Paul Kagame, the President of Rwanda and Ethiopia’s Prime Minister Abiy Ahmed.

Since 2017, Rwanda has led the top 10 best performers among Africa Union member States that were found to be on track towards achieving the commitments set out in the Comprehensive Africa Agriculture Development Programme (CAADP) known as the ‘Malabo Declaration.’

The 2014 Malabo Declaration is a re-commitment to the CAADP principles adopted by AU Heads of State and Government to provide effective leadership for the attainment of specific goals by the year 2025, including ending hunger, tripling intra-African trade in agricultural goods and services, enhancing resilience of livelihoods and production systems, and ensuring that agriculture contributes significantly to poverty reduction.

The leaders were selected alongside other great Africans who are celebrated for their Social Impact, as well as Social Entrepreneurship, that are transforming businesses in Africa and affecting lives positively without controversy.