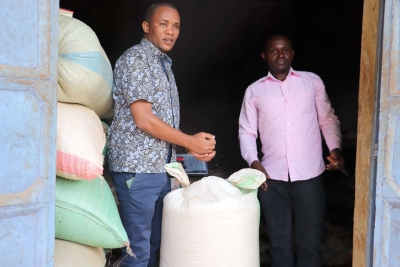 PAMACC News (Meru, Kenya) - Armed with a ‘mulika mwizi’ mobile phone gadget, Simon Kailikia, a 33 year old smallholder farmer from Baraimu village, Tigania West in Meru County has been able to triple his farm produce, thanks to a phone based platform known as e-Granary.

“Once again, we are expecting another bumper harvest in the next few weeks,” Kailikia told the Seeds of Gold as he patrolled his five acre piece of land under maize crop.

It is the fourth season he is using the e-Granary platform, which ensures that registered smallholder farmers have access to quality certified seeds and relevant farm inputs, access to finance (credit) to fund their activities, insurance cover in case of natural calamities, access to information about Good Agricultural Practice (GAP), and above all, access to weather and climate information so that crops are planted at the right time – all on a mobile phone platform.

After the harvest, registered farmers through their groups bring together all their produce and using the mobile platform, they can access the market collectively.

“There is clear evidence that Africa’s full agricultural potential remains untapped due to use of incorrect farm inputs, late planting, use of poor seeds, inadequate financing, lack of structured markets and lack of insurance cover to cushion smallholder farmers whenever they suffer losses based on the changing climatic conditions and related calamities,” said Mutiga Wanjohi, of the Alliance for a Green Revolution in Africa.

The e-Granary is a commercial solution developed by the East African Farmers Federation (EAFF) to improve social-economic status of smallholder farmers in 10 African countries in collaboration with governments, UN, Nongovernmental organisations and the private sector.

“We strive to effectively organize and aggregate the otherwise dispersed producer base, in order to achieve scale and engage as a significant stakeholder in the agricultural economy,” said Robert Kubai, the Evaluation and Learning Specialist at the EAFF.

According to Kailikia, it is the first time he has seen the benefit of smallholder farming despite having been brought up in a farming family.

“I was brought up in a farming family, and all through my life, I knew that farming was an activity for people who do not have any meaningful work to do,” said Kailikia. “But today, I have come to appreciate that farming is a sustainable business, beyond hand to mouth survival,” he said.

Kailikia says that his life changed when Baraimu Mathio Self Help Group was introduced to the e-Granary. “For all these years, I never knew that the five acre piece of land under my name had such a huge potential,” said the youthful farmer, and the chair of the group.

Before, he used to plant any seed that was available, sometimes without fertilisers and without following recommended agronomic practices.

However, in 2018, after registering with the e-Granary, he received certified maize seed and necessary farm inputs at the right time on credit. Using the mobile phone platform, he received a short message instructing him on when to plant. And later, he was alerted when the time for topdressing came.

“I was shocked because for the first time, I harvested a total of 93 bags from a piece of land where we used to harvest a total of 25 bags or 20 during a good season,” said the farmer.

Through the e-Granary, EAFF linked him to the buyers of his farm produce, who bought it at an impressive price of Sh3500 per bag. “I sold 87 bags and I used the money to construct a shop, which I now lease to my group members as a store for their produce,” he said. He has since constructed a permanent house from farming activities.

Out of the 67 members of Baraimu Mathio Self Help Group, 55 have completely embraced the e-Granary, most of them women and youth.

To benefit from the e-Granary, one has to be a member of a farmer group. Through the group, the farmer has to register to the e-Granary using a given USSD code because many smallholder farmers in rural villages do not own smart phones.

During registration, the farmer gives all the personal details, the size of the land, the location and the particular crops that they intend to farm. Using this information, the e-Granary calculates the amount of fertilisers and related farm inputs that will be required, and then the EAFF identifies where to buy the seeds, and signs a contract with a potential buyer.

With the contract in place, the EAFF is able to approach finance organisations for farmers’ loans in form of seed, farm input and insurance cover. The items are then delivered to the farmer groups, and using the documented farmer information, each farmer receives a customised package. After harvest, it is the farmer’s responsibility to pay back the loans.

“We insist on farmer groups so that farmers, group members can guarantee fellow members when loans are offered, and watch over each other so that no one farmer defaults,” said Kubai.

Today, over 200,000 farmers in the region are using the e-Granary, according to EAFF.