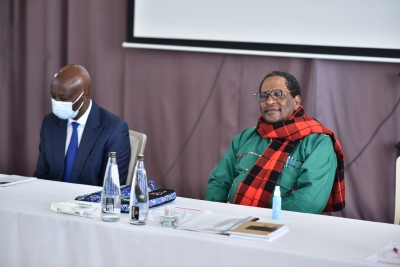 NAIROBI, Kenya (PAMACC News) - Kenya’s Cabinet Secretary for Environment Keriako Tobiko has called on African journalists to use the power of the pen to tell the Africa’s climate story from the African perspective, and petition the developed world to reduce emissions, and finance adaptation to the impacts of climate change in Africa.

“It is no longer an issue of climate change, this is climate crisis and climate emergency,” the Cabinet Secretary told a team of African journalists, researchers and members of the civil society during the launch of the Africa Climate Story Media Initiative (ACSMI) in Nairobi.

The ACSMI initiative is collaboration between the Pan African Media Alliance for Climate Change (PAMACC), and AfricaonAir, an organization that seeks to build capacities of African journalists through training and mentorship programs.

Trough this initiative, African journalist will publish well researched groundbreaking articles on PAMACC website, and PAMACC will allow other media houses across the continent to republish the articles free of charge as a way of amplifying the climate narrative ahead of COP 27 in November this year.

“We have aggravated the climate crisis and right now, the world is burning,” said the Cabinet Secretary.

He blamed climate deniers and fossil fuel supporters who are now out to distort the climate science. “It was sad to see that the 26th round of climate negotiations that happened in Scotland was heavily funded by heavy climate emitters, who unfortunately control over 85 percent of the global GDP,” he said.

He noted that Africa is investing so much in climate change adaptation, but from all the Conferences of Parties, African countries have always been asked to increase their ambitions on their national contributions towards the fight against climate change.

“I challenge you to go out there and tell the true African climate narrative,” he told the journalists.

During the event, Ephraim Shitima, the Chair for the Africa Group of Negotiators (AGN) noted that most funding that came to Africa was issued as loans, but considered to be part of climate finance.

“We need to distinguish between loans and climate finance,” he told the journalists.

He noted that for the African Group, COP27 should be about advancing the implementation of the National Determined Contributions (NDCs), including adaptation and mitigation efforts and delivery of finance to enhance implementation.

“COP26 concluded the remaining guidance on implementing the Paris Agreement on climate change, therefore, we need to advance the implementation of our climate actions,” the AGN Chair told the journalists.

The Pan African Media Alliance for Climate Change (PAMACC) is a network of African Journalists who report on climate change, environment, sustainable development and related subjects.

The network was formed on the 5th of June 2013 in Nairobi, Kenya by environmental journalists, who were then finalists of the first African Climate Change and Environmental Reporting (ACCER) Awards. The award was an initiative of the Pan African Climate Justice Alliance (PACJA) in collaboration with the United Nations Environment Programme (UNEP).

AfricaonAir is a dynamic media and content production platform working with media owners, investors, regulators, managers, journalists, training institutions and donors to support the re-tooling, re-skilling and re-imagining of a new vibrant media sector capable of advancing peaceful, wealthy and just societies in Africa and beyond.

Founded in 2011 by veteran broadcast professional journalist Joseph Warungu who brings over 30 years’ experience in international journalism, most of it with the BBC in London, where he was head of the BBC African News and Current Affairs department; AfricaonAir is setting a new bold and ambitious agenda for Africa’s Media sector through training, research and strategic partnerships with diverse actors and institutions across public, private and development sectors.

AfricaonAir is creative in its niche and methods, and is also more committed to helping young journalists experiment and take part in a resilient transformation of the world. AfricaonAir helps media organizations understand current transformations (evolution of media uses, representations and values, structural changes, audience mobility trends) and incorporate these insights in editorial and commercial management.

Since its establishment, AfricaonAir has been the recipient of a number of high profile international awards, including the 2019 Global Youth News Media Award for making an outstanding contribution in media literacy through Top Story - its flagship young journalism students mentorship programme run in collaboration with 25 universities.