Villagers in bitter fight with sugar firm over prime land 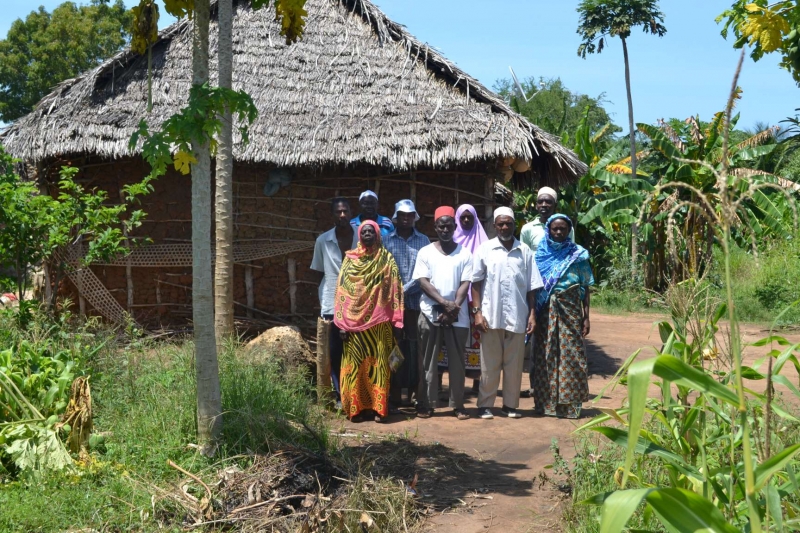 Members of the committee

KWALE, Kenya - Ashura Shehe Boi, 41, is struggling to take care of her seven siblings after their mother died in 2013 from a stroke she suffered when her house was razed down and the family evicted from their ancestral land.

A few kilometres away from her home, there are graves of Juma Gomba and Juma Zaidi, both who were arrested, tortured and died for opposing evictions of their families.
At another home, Hassan Salim Dongo is at a bitter man after losing his son, Feisal Hassan, who died from burns after their house was torched by goons hired by the owner of Kwale International Sugar Company (KISCOL) in Msambweni, Kwale County. This happened under the watch of security officers.

Another child agednine years is living with scars sustained when he was burnt in their house during the fateful day. A medical examination report signed by a Mr Chebii, a medical officer, on October 7, 2010 shows that Hassan suffered burnt scars on the chest, breasts, elbow and hip.

Life with evictions, arrests and threats have become the order of the day for the locals of six areas of Msambweni in Kwale.
The people here are fighting for LR. No. 5004/30/R, the 49,000 acres of land in Mabatani, Nyumba Sita, Vidziani, Gonjora, Fahamuni and Kingwede areas.
According to land records, the land was at independence registered as a trust land belonging to the Digo community which has lived there since time immemorial and have no other place to call home.

But the troubles of the families who now number to 4,000 families with an estimated population of 10, 000 began in 2008 when armed security officers supervised the burning down of their houses, cutting down of their coconuts, mangoes, maizeplants and trees and forcefully evicted them at the dead of the night.

“My mother Fatuma Shehe Boi suffered a stroke as a result of shock when she saw her house burnt. She had kept gold in our house but it was all lost. She was bedridden from 2008 and died in 2013 leaving me with the task of taking care of my seven siblings,” Ashura says.

Suleiman Bakari Shauri, 65, chairman of the Vidziani Farmers Group which the affected families formed to fight for their rights is a bitter man and accuses politicians, senior government officials and owners of the Kwale International Sugar Company Ltd (KISCOL) for their woes.

“My parents who died recently aged 80 and 61 respectively were born and lived here all their lives. It beats reason that now we are being evicted from our ancestral land. Our problems began when former president Mwai Kibaki visited here in 2007 and promised to give the owner of KISCOL 15,000 acres of land for a sugarcane nucleus estate for his factory,” Shauri says.

KISCOL replaced the old Ramisi sugar factory which closed shop in 1989. “The old factory owner’s lease of 99 years expired in 1986 and former president Daniel Arap Moi ordered that all the land that was initially occupied by sugarcane be reverted to the community. This was minus ours that we are fighting for now,” Shauri says.
Said Omar, vice chairman of the group says the community is leaving in fear and without hope of ever getting the justice they are fighting for. He says the owner of the factory is so brutal that he does not even care about court orders.

“He colludes with security officers and hires goons who come to burn down our houses. Sudi Twabara, who offered us land to build temporary structures after we were evicted was arrested and taken to Msambweni police station. He was arrested in 2008. He came back a few days later shaken and died a few days later. We don’t know what happened to him,” Omar says.

The troubles forced Shauri, Omar, Ashura and other committee members of their group who are Kassim Ali Kama, Tsudzi Bamvua, Abdalla Reja, Bakari Ali Nguvu and Rama Mwinyi Madzumba to move to court.

The committee members together with other 61 community members have filed a petition at the High Court in Mombasa under the Constitutional and Judicial Review Division. The petition number 65 of 2011 was first heard at the Mombasa court on October 25, 2011. It was filed on behalf of the petitioners by lawyer Japheth Chidzipha.
The petitioners want KISCOL owner’s servants, agents or employees permanently stopped from evicting them from their ancestral land as continued evictions have rendered them homeless and destitute.

“Chidzipha has already pulled out of the case. We are now being represented by lawyer Christine Kipsang. The case will again be heard on 17 of this month. Though the case has dragged on now close for a decade, we are optimistic we will emerge winners, one day,” Shauri says.
Kwale County Lands and Environment County Executive Committee Member (CEC) Member Saumu Beja Mahaja who spoke on authority from area Governor Salim Mvurya said there is no way they will abandon the community.

“We are supporting the community in court and we are awaiting the ruling which we hope will give back the land the rightful owners. We welcome investors but we are not ready to let our people lose lives, land, homes and their livelihood over profit,” Mahaja said in her office in Kwale.

She said Mvurya has visited the troubled area to stop evictions and has vowed that his administration will make sure the land is returned to the locals.

“We are aware of the interest by high ranking politicians to grab land here because it is rich in minerals and is even home to the Base Titanium company and maginificent beaches that allow you to see the ocean’s blue water and the Chale Island. But investment should not be done at the expense of lives,” Mahaja says.

According to the company’s audit report the financial year ended December, 2017, KISCOL posted a Sh75 million profit. In 2016, it made a loss of Sh618 million.
The company's core activities include processing of sugarcane for the production of sugar, ethanol and electricity and record show it is a $200 million sugar processing facility, incorporating 5,500 hectares of cultivated cane, a 3,000 tonnes-crushed-per-day sugar mill and an 18 megawatt bagasse-fired power plant. It is listed as one of the largest green field projects in Africa andbegan fully operating in 2014.

“I blame former National Lands Commission (NLC) chairman Prof Muhammad Swazuri, who ironically comes from Msambweni for authoring a letter that allowedeviction of the locals to make space for planting of sugarcane. This is inhuman and fraudulent,” Zulekha says. Swazuri has since left NLC and is in court fighting against corruption and abuse of office accusations.
The team visited former Prime Minister Raila Odinga in Nairobi to seek for assistance.

“We visited Raila on July 15 this year. He listened to us and took us to Interior Cabinet Secretary Dr Fred Matiang’i. Our intention was to meet President Uhuru Kenyatta and request him to give us our land back but we missed the opportunity. Matiang’i promised to investigate the matter,” Shauri says.

The story was first published by The Standard Media Group as part of Protus Bertha Foundation 2019/2020 Fellowship.

The writer is a Bertha Fellow.