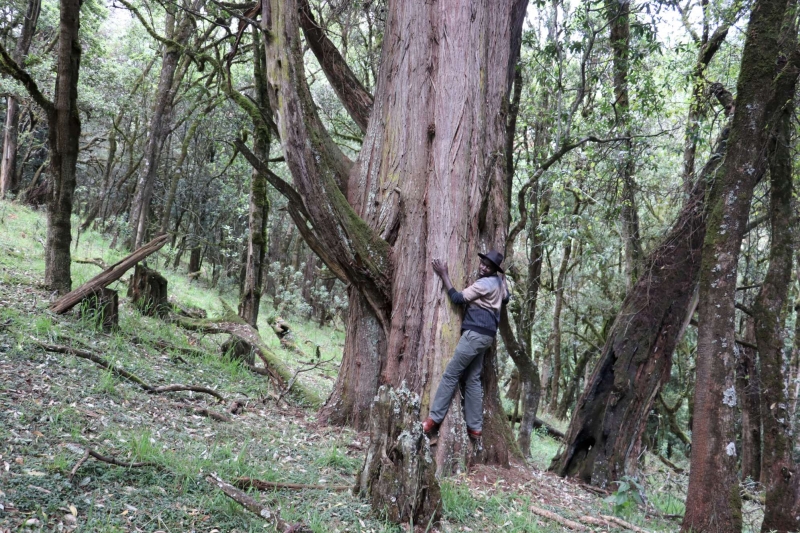 Ogiek's Mt Elgon Forest: Government agency uses forest conservation as excuse for violating rights guaranteed under ground-breaking court ruling
NAIROBI, Kenya (PAMACC News) – As cold weather prevails mid-year in Kenya and temperatures plummet in the highlands where traditional forest peoples live, COVID-19 is surging across the country.
But rather than being able to shelter safely in their homes, Indigenous and forest dwelling communities are being evicted from their ancestral lands, and their homes and farms destroyed by their own government.

In the Mau Forest, the Kenya Forest Services (KFS) has demolished over 300 Ogiek homes, and fences, farms and livestock have been destroyed. Children and other vulnerable community members have been left homeless during the pandemic.

In Embobut Forest in the Cherangany Hills, the KFS has burned 28 homes belonging to extremely poor Sengwer, including their blankets, utensils and other essential belongings.

In both cases, the government is arguing that the evictions are necessary in order to conserve the Embobut Forest and the Mau Forest, large closed canopy forests in Kenya and important watersheds. The government has repeatedly claimed that preserving this ecosystem takes priority over land claims of the Ogiek, Sengwer and others. Yet, a growing body of evidence shows that honouring land rights is the foundation for conserving forests sustainably, including those of national and watershed importance. This is the path which so many modern governments now take and global conservation organizations agree.

In its May 2017 judgment, the African Court of Human and Peoples’ Rights declared that the Ogiek were not responsible for the depletion of the Mau Forest, and its conservation could not be used to justify their eviction, nor could it be used to deny them their rights to practice their traditional livelihoods.

The Court also ruled the Mau Complex was indeed the ancestral land of the Ogiek, to which they therefore hold rights. It asked the Ogiek and the Government of Kenya to put forward proposals for working with this reality. The Ogiek submitted a step-by-step plan of action to the Court; the plan respects and protects Ogiek as owner-conservators, issuing them with community land titles subject to rigorous conservation conditions. It also states clearly that most of their ancestral land within these domains will be designated as protected Community Forests and habitation limited to natural glades and moorlands. The Ogiek outline how they will work with KFS to zone and manage the forest well. But three years on, the Government has failed to make detailed submissions, causing the African Court reparations hearing to be postponed until September 2020.

Likewise, the Sengwer’s traditional knowledge system – now captured in written bylaws – long served to conserve their forest home. This forest culture still, like the Ogiek, holds intact forest sacrosanct even as lifestyles have been undermined by decades of government policy, which have left the forests vulnerable to illegal logging, poaching and encroachment by outsiders.

The Sengwer are also pursuing justice in the courts, although they have appealed repeatedly to enter a practical ‘win-win’ partnership with KFS as accountable on-site guardians, as have the Mau Ogiek and Elgon Ogiek. Donors have stood by time and again to help but cannot fund projects where human rights including land rights are denied.

Many Kenyans who are not forest peoples, but pastoralists and settled farmers, are also suffering the brunt of an administration which underestimates the tolerance of modern rural communities to poorly-conceived strategies and which are sometimes implemented with brutality by armed forest guards.

Communities continue to dispute claims by government to forests they traditionally own. A number of new public forests have been announced by KFS. These include 70 new forest gazettements in 2017 alone, across 11 counties.

“We wonder which County will be next” said Mr. Mali Ole Kaunga, Member of Il Ngwesi community in Laikipia County. “So many communities are wrongly losing their natural forests and the chance to prove they too can protect and conserve.”

Communities also deplore the lawlessness around evictions. “It is unlawful and also immoral for Government to evict people without proper notice and in cold seasons—even ‘in the name of conservation’,” said Mr John Mwaiseghe, Member of Mdawida community, Taita Taveta County.  “We believed government would honour its additional pledge in May 2020 to not evict people during COVID-19”.

Mr Wilson Kipsang Kipkazi, member of the Enderois community in Baringo adds: “It is also unlawful to deny the Constitutional declaration that the ancestral lands and forests lawfully used by communities are community land. Legal routes for recognition of ancestral lands or transfer from Public to Community Lands are being curtailed by amendments even preventing us accessing legislators on forest matters without consent of the Service. The Community Land Law of 2016 binds communities to protect their forests and other resources, but which we cannot easily do for as long as government goes slow on surveying and titling our lands. The Forest Law of 2016 provided for Community Forests—but now draft policy implies these will be only for new plantations which communities are advised to develop. First, we need assurance that our existing natural forests and woodlands will not be taken from us”.

“Kenyans may question if communities can really protect natural forests. We know we can,” said Mr Peter Kitelo, Member of the Elgon Ogiek community, Bungoma County and Chair of the Community Land Action Now (CLAN) network. “Foresters and officials only need to look at the evidence of so many brother and sister communities on all continents.”

Communities were already acknowledged as owner-conservators in over 448 million hectares of  forests by 2017. Many Community Forests are even now designated as Forest Parks and Reserves of national importance, and scientific studies testify to their success.

“The Mau Taskforce, for example, was shown NASA satellite imagery last year, illustrating how the major areas not burned in the raging fires in the Brazilian Amazon in mid-2019 were the millions of hectares, including protected parks, owned by forest peoples,” said Mr. Yator Kiptum, Member of Sengwer community of Cherangany Hills, Trans Nzoia County.

Community owned forests have also been the flagship of expanding natural forest protection in Africa, including in Namibia, The Gambia, and Tanzania, and are now evolving in Liberia and the Democratic Republic of the Congo (DRC).