Pull up your socks! NEMA told at workshop to sensitise community resilience to climate crisis 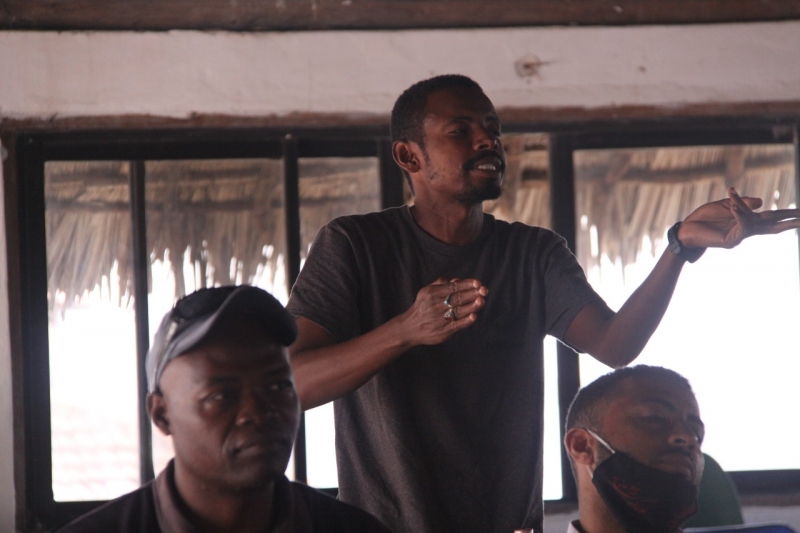 Lamu residents during the workshop

LAMU, Kenya (PAMACC News) - Lamu residents in Kenya's coastal region through their Civil Society Organisations (CSOs) have called on the National Environment Management Authority (NEMA) to pull up their socks in the conservation of the currently degrading environments of the Island.

Speaking during a three-day workshop organised by the Pan-African Climate Justice Alliance (PACJA) in partnership with the Open Society Initiative for East Africa (OSIEA) through the Kenya Platform for Climate Governance (KPCG)on proper land use planning for community climate resilience, Ishaq Abubakar of Save Lamu, accused NEMA of being directly linked to all the environmental problems; including destruction of the ocean and sea life, hunger and increased poverty, unprecedented destruction of mangroves amongst other challenges currently experienced in the Island.

In responding to the accusation, Joshua KahindiYeri of NEMAin Lamu County admitted to a few of the challenges but asked for continued collaboration and partnership, especially during environmental impact assessments to ensure the wrongs are over-written.

“Ndio, hatukataimakosamoja au mbili yalitokea, lakini kwa sasatunawahitajituungemikonopamojamanakemkonomojahalivunjichawa. (We agree that one or two mistakes have happened during our watch, it is not true that all environmental problems in Lamu have been caused by NEMA. Let’s unite and forge ahead),” stated MrKahindi.
He further explained that given functions, including air quality, waste management that NEMA was responsible for, had since moved to the county government Department of Public Health and Environment.

“While we are a coordinating body, we implement the Environmental Management and Coordination Act (EMCA), which is very keen on integration of land uses for community climate resilience,” Kahindiadded, as he explained the process of environmental impact assessment as a tool and process for deciding land use plans and climate resilience.

In attendance at the three day workshop were key county departments likePublic Health and Environment, the Department of Agriculture, the Kenya Wildlife Service (KWS), Lamu Water and Sewerage Company, the Fisheries Department and several other key departments of the county and CSO actors relevant to land use planning and climate resilience.
Matthias Muavita of KWS said: "KWS is very keen on promoting resilience at the community level through the implementation of the Wildlife Conservation Act."

The workshop, held at SunSail Hotel, aimed at capacity building the community on the nexus between land use planning and climate change,providing a platform for the community to dialogue with the respective county officials and identifying potential action points; based on the county spatial plan for action for enhanced community resilience in the county.
The LAPSSET project and its seven components, the coal power plant, the Blue Economy were among those identified by the CSOs as the potential projects that will likely disrupt their land use plans and cumulatively lead to adverse impacts of climate change if not relooked by the authorities involved.

The KPCG, Lamu Chapter also signed anMoU with the localSifa FMchampion spread of information on the nexus between land use planning and climate change and ensure increased advocacy for the good of the local ecosystem.

KPCG lead Meryne Warah said: "The future and resilience of vulnerable ecosystems like Lamu lies on proper land use planning, and this we cannot achieve alone. Partnership is key in ensuring the peace of the entire coastal ecosystem".

According to Swalleh Elbusaidy, the Lamu County Community Resource Person for the KPCG and also the Takataka Foundation lead, it is time to do things differently “for us and the future generations".He spoke after signing the MoU with the Sifa FM, and added that there was no time to waste in saving the Island and the ecosystem it falls in.

Mr Halifa, a representative of the Lamu County’s Department of water, was glad that the workshop was made to happen, adding: "Having sessions such as these and discussing critical issues like land use planning and community climate resilience based on our spatial plan is such an eye opener for us as a county."

Several Lamu residents also gave their thoughts on the status of the implementation of the LamuCounty Spatial Plan 2016-2026 in the perspective of community climate resilience. The feeling was the same across the meeting: Much more needs to be done for the sake of the land, people and the natural resources the county is blessed with.

"We need to relook the spatial plan and input accordingly on the components of environment to ensure the same are on the CIDP (County Integrated Development Plan) and the county budgets," said Amina Mohamed, a participant, after KPCG’s Collins Otieno took them through the Lamuspatial plan while identifying opportunities for CSOs mobilisation for action for climate resilience.

“To some level, we have to question the development plans of the county as they are in one way or another dependent on our livelihoods and adaptive capabilities," said Abdul Aziz Adu of Lamu Child Protection.

Some argued that it was not fair that the decisions on things happening locally were made far away and imposed on them. "It is so unfortunate that we are planned for in Malindi, Nairobi and other places yet we have the capacity and knowledge about what we need for our generation and future generations’ resilience," said Mohamed Mbwana, a Lamu resident.

“Community mobilization and involvement in laying out land use plans is very critical to climate resilience," claimed a different participant, aMrOmar.

"The ocean is our life and the mangroves are our external lungs. We must question certain land use plans for our well-being and resilience," said Councilor SharifaAbubakar.
Some blamed the laxity in monitoring land use at the coastal town on the Covid-19 pandemic. "The outbreak of Coronavirus even exacerbated land and land use planning injustices in Lamu. Most of the projects that had questions are ongoing," averred Mohamed Mbwana, also a participant at the workshop.

In the end, participants resolved that collaboration and cooperation between CSOs, county and national governments in implementation of the land use plans, increased and continuous awareness and capacity development workshops for the community on land use planning as well as establishment of a multi-stakeholder platform for advocacy on land use planning were key to ensuring community climate resilience.