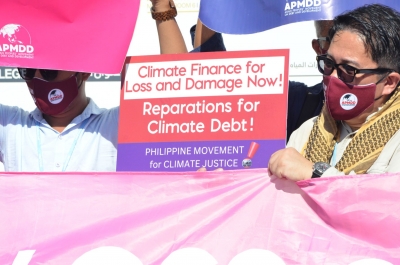 The first fruits of a relentless push by the African Civil Society groups for the World to pay up the much-needed Climate Adaptation Finance required by vulnerable countries in the continent is finally beginning to trickle slowly in “small dollar bills”.

The COP27 President, H.E. Sameh Shoukry and US Special Presidential Envoy for Climate, John Kerry, announced the initiative to accelerate adaptation in the African continent to save millions of lives and livelihoods.

The package worth $150 Billion was announced at a special session on "Advancing Adaptation Action in Africa" co-hosted by H.E. Sameh Shoukry, COP27 President, and the United States Special Presidential Envoy for Climate, John Kerry.

COP President Shoukry speaking at the events, said: “The key challenge for African countries is to access funding for climate action. Recognizing that progress towards adapting to climate consequences and enhancing resilience is crucially needed, we launched here at COP27 the Sharm-El-Sheikh Adaptation Agenda a couple of days ago.”

This agenda comprises a total of 30 global adaptation outcome targets by 2030 that are urgently needed to address the adaptation gap and increase the resilience of 4 billion people through accelerating transformation across five impact systems: food and agriculture, water and nature, coastal and oceans, human settlements, and infrastructure.

COP27 President H.E, Shoukry further said, “Egypt, as COP27 President and as an African nation, is well aware of the adaptation challenges facing our continent, and we are pleased to have collaborated over the past year with the United States to develop a diverse package of support for Africa in the field of adaptation and resilience.”

The US Emergency Plan for Adaptation and Resilience (PREPARE) has seen the US double its Adaptation Fund Pledge to $100 million, while the Accelerating Adaptation in Africa initiative provides $150 million in support to accelerate PREPARE’s work across the continent.

The Adaptation in Africa initiative, previously announced in June 2022 by President Biden and President El-Sisi, has the potential to result in USD 4-10 benefits for every dollar invested.  It now includes support from the US for $13.6 million for a Systematic Observations Financing Facility that will help fill weather, water, and climate observation gaps in Africa.

$15 million to support the co-development and deployment of early-warning systems in Africa to cut the number of people who need emergency assistance in half by 2030 - and from 200 million to just 10 million by 2050.

There is also $2 million to the Resilience and Adaptation Mainstreaming Program to build the capacity of governments to manage climate risks and access finance. Meanwhile, $3.5 million in support for the Least Developed Countries Initiative for Effective Adaptation & Resilience will help African countries like Uganda, Malawi, Gambia, and Burkina Faso to enhance access to adaptation finance for the most vulnerable.

Expanding access to risk-based insurance for the most vulnerable by supporting regional risk insurance pools, including contributing $12 million to the Africa Disaster Risk Financing Program and $12 million to ARC Ltd.

$25 million to the African Union’s flagship Africa Adaptation Initiative (AAI), which is hosted by the Egyptian government, to launch the AAI Food Security Accelerator, which will dramatically speed- up and scale up private sector investments in climate-resilient food security in Africa.

Encouraging private sector innovation through $3.8 million to CRAFT TA Facility and $2 million to launch an adaptation window of the Global Innovation Lab for Climate Finance to help develop new financial instruments and mechanisms to harness private investment in adaptation.

$100 million in adaptation funding in FY 2022 to support food systems
The President of the United States of America also announced the launch of a new initiative to support Egypt in deploying 10GW of new wind and solar energy while decommissioning five GW of inefficient natural gas generation.

Special Envoy Kerry said: “We are completely committed to working together with our partners to support vulnerable communities in their efforts to, sadly, have to adapt to the impacts of climate change. Something that everyone, whether in developed, developing or emerging economies are impacted by.”

Earlier this week, in a statement released via the US Embassy in Cairo, Kerry stated that “unprecedented” investment in clean energy is needed to limit warming to 1.5°C and avert catastrophic climate impacts on communities worldwide. His statement added that “annual clean energy investment must triple to $4.2 trillion by 2030”, with over half of that investment needed for emerging and developing economies.

The "Advancing Adaptation Action in Africa" event was immediately followed by a second event, also jointly hosted by Egypt and the United States, addressing “Accelerating mitigation ambition while ensuring energy security”, placing focus on providing support for the Egyptian Nexus of Water-Food-Energy (NWFE) program.
At COP27, Egypt signed partnerships for its NWFE program to support the implementation of climate initiatives with investments worth $15 billion. This includes an energy project worth $10 billion and eight food security, agriculture, irrigation, and water projects.
“I wish to thank the United States for the extremely constructive collaboration we have had over the past year in developing this package, which demonstrates the commitment of both Egypt and the United States to the cause of adaptation in Africa and is indeed an exemplary representation of the COP27 mantra of implementation and action,” concluded COP27 President H.E. Shoukry.
While the Small dollars bills are appreciated by African Countries, the continent-wide climate justice campaign group – the Pan African Climate Justice Alliance (PACJA), says developed nations, the Group of 77 and China must pay up their Finance Adaptation plan of $100 Billion a year for adaptation and Mitigation of Climate Change in Africa by 2050.
PACJA's Augustine Njamnshi says delivering the small dollar bills should be complemented with robust green investment in Africa. He says, “what Africa needs is not loans but grants. African countries are already highly burdened by loans. And this is why the African voice constantly calls for reparations for the loss and damages suffered.”

Early on Wednesday of the first weeks of COP27 talks, China said it would not pay a single small dollar bill into the climate loss and damage fund for developing nations after small island nations pinned it for responsibility as a high carbon emitter at the U.N. Climate Change Conference in Egypt.

That was the first time developing nations like China and India were added to the list of countries financially accountable for higher global carbon emissions.

In response, Chinese climate envoy Xie Zhenhua said, “Beijing would support such a mechanism for the payment of loss and damage, but would not pay cash into the loss and damage fund,” adding that his nation “is not obliged to contribute.”

Developing nations are seeking such funds from developed countries as reparations for economic and non-economic losses they have suffered under the speeding wrath of climate change.

The Pan African Media Alliance on Climate Change (PAMACC) has learned that there is a legal burden to prove for developing nations to derive reparations for Climate loss and damage with pinpoint evidence that economic loss or damage suffered was a direct result of pollution or emission event in that particular developed country.

This makes it a tall order for developing nations to hold developed nations to account for loss and damages as well as human rights violations occasioned by weather disasters in their nations.