Solheim pledges to tackle major environmental issues such as ocean and air pollution, climate change, and nexus between conflict, migration and the environment

NAIROBI, Kenya (PAMACC News) - Erik Solheim, a former Minister of Environment and International Development in Norway has began his tenure as Executive Director of the UN Environment Programme, with the concurrent position of UN Under-Secretary-General. Mr. Solheim assumes his new role as chief of the global authority on the environment after three years as head of the Development Assistance Committee (DAC) of the Organization for Economic Cooperation and Development (OECD).


In taking up office, Solheim pledged to work with countries around the world to tackle some of the most pressing environmental challenges of our time, including ocean and air pollution, the destruction of ecosystems, climate change and the relationship between the environment and conflict and migration.

He also promised to focus on environment issues close to people, such as damage to human health from air pollution.

Solheim said, "There is an urgent need to fight climate change, halt ecosystem destruction, and reduce pollution for the benefit of all peoples everywhere. By protecting our planet, we protect ourselves and in the process can help bring every last person out of poverty. We all have a stake in a healthy planet."

He noted other urgent areas to address include the private sector investment needed for sustainable development, greening the finance sector and creating jobs and markets with clean and green technologies.

"Financing the preservation and rejuvenation of our planet cannot be the purview of governments alone. Private sector finance is both vital for sustainable development, and an opportunity for business. As never before, markets are rewarding investments in clean and green jobs and technologies."

Solheim also underlined that issues like climate change and sustainable development are issues that no one country or organization can solve themselves, and that the world must come together to tackle environmental challenges.

"With successes like the Paris Agreement and the Sustainable Development Goals, the world has achieved a lot in recent years when it comes to the environment. We can achieve a lot more. But the only way to do this is by working cooperatively. I look forward to working with member states and welcoming voices and efforts from all parts of society to tackle our common challenges.

"Our planet is vulnerable, but I'm optimistic we can resolve the environmental problems we face. There's little we can't achieve when we pull together with cooperation, collaboration and a can-do attitude."

Having spent most of his career fighting for the environment in national and global politics, including through non-governmental organizations and during his combined ministerial portfolio, Mr. Solheim has focused on the challenge of integrating environmental and developmental issues. During his ministerial tenure, Norway reached 1 per cent of its GDP for overseas development assistance and passed the unique Nature Diversity Act. He initiated the process leading to the global coalition to conserve and promote sustainable use of the world's rainforests - the UN REDD - gaining invaluable diplomatic and organizational experience.

Holding an undergraduate degree in history and social studies from the University of Oslo, Mr. Solheim has received several awards for his work on climate and environment, including UN Environment Programme's "Champion of the Earth" award, and contributed to a number of peace and reconciliation efforts, most notably as the chief negotiator of the peace process in Sri Lanka. 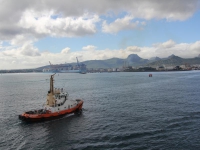 DAR ES SALAAM, Tanzania (PAMACC News) – Extreme droughts, floods and other climate challenges are leading to an increase in both the number and intensity of disasters all over the world and in Africa in particular. Countries in the Sahel regions in Africa are worst affected, experts have revealed.

Participants at a technical meeting in the 6th Africa Water Week in Dar es Salam on July 19, 2016, agreed early warning systems adapted to the realities of different countries will help governments cope with the huge climate challenges plaguing Africa.


“African countries are barely able to cope with the massive climate challenges, but we think the institution of early warning systems adapted to the realities of each country is cardinal,” noted Mohamed Gilla of the Lake Chad Basin Commission at the meeting.

He said combining local and expert knowledge in addressing the challenges will yield more fruitful results.

“While expert knowledge with innovations is a key driver, the use of local and indigenous knowledge cannot be left out,” Mohamed said.

Convened by UNESCO and Swedish Meteorological and Hydrological Institution, the event focused on the theme “Early warning systems for water extremes and climate change information in Africa.”

Panelists highlighted ongoing tools and methodologies in addressing floods, droughts and other water related climate disasters in Africa and suggested ways of improving on them.
One of the key elements in any early warning system it was agreed is communication of the right information and training.

“Getting the right information to the relevant target audience is capital. Also of no less importance is capacity building of both the indigenous population and the experts,” the panelists noted.

Use of local knowledge and resource persons
The creation and training of a committee of local volunteers to assists regularly in activities to improve on existing warning systems such as measurement of water level of rivers, streams and sending on the data for analysis to existing weather forecasting centers was also highlighted.

Networking with local resource persons and knowledge has yielded positive results in early warning methodologies in many countries in Africa, experts said.
“If there are any irregularities, these local vigilant committees inform the first-aiders in the villages, who warn people via local radio and phones if a disaster is imminent. In the event of flooding, they help to evacuate the villagers to higher ground,” said Obrigada Joana of Waternet Trust in a presentation at the meeting.

In many countries where such local organization exist like the case of Mozambique, these early local committees are an important step in adapting to climate change, she revealed.
Expert however agree the use of early warning technologies like weather forecast centers have their limitations given that climate science is not exact science with stated formula.
Countries in the Inter-Tropical Convergence Zones for example,witness  intense thunderstorms around the equator where the trade winds from both hemispheres meet frequently. They thus experience heavy showers and thunderstorms which develop and dissipate very suddenly.
In the tropics, the weather systems are largely driven by prevailing winds whereby small changes in the wind speed and direction can result in significant changes in weather. The problem is compounded because winds near the equator are generally quite light and variable, and thus more difficult to predict, experts explained.
In Chad for example wrong signals of predicted heavy winds in 2010 caused state authorities to close down the use of the airport for over a week causing the state heavy loss as the winds never came.

DAR ES SALAAM, Tanzania (PAMACC News) – Use of mobile telephone technologies and community radio services has been cited as some of the best methods of sharing and disseminating climate information for effective early warning, and adaptation.

Experts attending the sixth session of the Africa Water Week (AWW) in Dar Es Salaam, Tanzania have pointed out that early warning systems can be set up to avoid or reduce the impact of hazards such as floods, landslides, storms, and forest fires. However, the significance of an effective system lies in the recognition of its benefits by local people.


According to Dr Abdourahman H-Gaba Maki, of the IGAD Climate Prediction and Applications Centre (ICPAC), early warning system is a major element of disaster risk reduction, and helps in preventing loss of life and properties. “This also ensures there is a constant state of preparedness,” he told the AWW.

To make the system effective and relevant to the people, the Intergovernmental Authority on Development (IGAD) has developed a mobile telephone application (app) known as “IGAD-ASIGN”, through which mobile phone owners have an opportunity to contribute towards disaster preparedness by taking and sending photos of given geographical situation, in relation to an impending, or a particular disaster.

“The IGAD-ASIGN is an important smart-phone application because it facilitates interaction and feedback from the ground,” said Maki.

The photos taken by volunteers are used as field validation of IGAD and other partners’ satellite image analyses, thus contributing to accurate and efficient disaster risk reduction solutions. This has helped vulnerable countries in the Greater Horn of Africa region to make better and faster decisions.

In the same vein, Maki pointed out the RANET radio networks operated by the Meteorological Department in Kenya, through which farmers and residents are able to access climate related information via community based radio stations, which usually broadcast in local languages.

‘RANET’ is an international collaboration of meteorological and similar services working to improve rural and remote community access to weather, climate, and related information.

Less than two years after it went on air, Nganyi RANET Community Radio in Western Kenya for example, has become a valuable asset to the community, where many people keep glued on their radio sets listening to different programs, while other access the signal via mobile phones.

Through this radio station, the community served by the station can now understand when it is likely to rain, whether the rainfall will be heavy to cause floods, when the dry spell is likely to begin, hence, helping them prepare for the eventualities.

It helps farmers know when to plant and the type of seeds to plant depending on the amount of rainfall expected.

The Horn of Africa region has been noted to be one of the most vulnerable regions to climate change in the world (IPCC, AR5, 2014) due to the inadequacy of resources to adapt socially, technologically and financially.

Use of radio and mobile phones therefore ensures that the required information reach the people on the ground, as a way of reducing the negative impact of climate change.

According to the International Federation of Red Cross and Red Crescent Societies, early warning systems have limitations in terms of saving lives if they are not combined with “people-centred” networks.

To be effective, says the federation, warnings will have little value unless they reach the people most at risk, who need to be trained to respond appropriately to an approaching hazard.

And now, with the bigger percentage of people in rural areas having access to community radio, and some of them to smart-phones, it has become easier to interact between the government, the people and the experts.