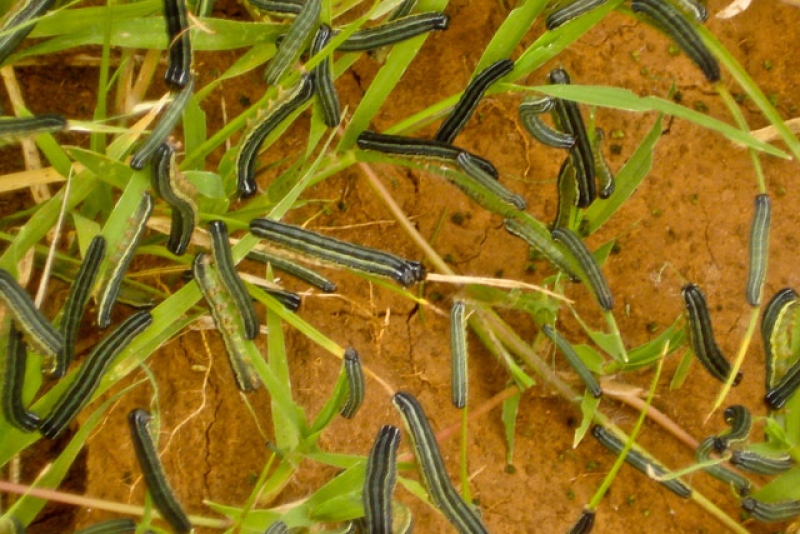 YAOUNDE, Cameroon (PAMACC News) - The fight against the spread of the Fall army worm in Africa in general and the west and central Africa in particular has moved from the level of planning to concrete action, development  and research organisations in the continent have said.

Meeting at a high-level  conference on controlling Fall armyworm in west and central Africa in Yaoundé, Cameroon, the different stakeholders agreed it was time to double steps with multiple actions to stop the rapid spread and destruction of the invasive pest.

Reports presented during the conference noted that FAW is expected to spread throughout suitable habitats in mainland sub-Saharan Africa within the next few cropping seasons if not properly controlled.  Central, West, Northern Africa and Madagascar are all at risk, the report noted.

With the current rate of spread, Fall Armyworm has become a threat to the food security of over 300million people in sub-Saharan Africa, with rural people most affected.

Agriculture authorities in Cameroon say the larvae of the nondescript gray moths has been spreading rapidly hatching and eating their way through the fields of young maize and millet  threatening  the food crops supply not only in Cameroon but the entire  Central African Economic Commission,CEMAC ,region.

« The damage has been rapid affecting  both farmers and business operators in the sector. This is not good news, » Louisette Clemence Bamzok, head of agriculture development at the ministry of agriculture and rural development in Cameroon said.

The authorities are worried the pesticides applied by farmers so far have not yielded the expected results.  A new plan of action in collaboration with partners has been launched.

“The pest seem to be resistant to pesticides and other chemical products distributed to farmers. We are working with the Institute of Agricultural Research for Development (IRAD) to find a lasting solution,”  says Louisette Clemence Bamzok.

A report by the Food and Agriculture Organisation,FAO , say farmers will need great support to sustainably manage the pest in their cropping systems through Integrated Pest Management.

According to Jean-Baptiste Bahama of the Food and Agriculture Organisation (FAO), the operationalisation of National Task Force on fall armyworm is key to efficiently coordinating preparedness and response through contingency planning.

“The time is now to invest in a sustainable, effective response to FAW in Africa. The only thing missing are the resources to scale-up and scale-out this important work,” he added. To AfDB's country Manager for Cameroon, Solomane Kone and Chrys Akem, TAAT Programme Coordinator at the International Institute for Tropical Agriculture (IITA), this is where the AfDB comes in through the Technologies for African Agricultural Transformation (TAAT) programme.

The  government of Cameroon  for its part says they are leaving no stone unturned.

« We are multiplying efforts and hope a solution will be found timeously, » Clementine Ananga said at the launch of the new plan in March 2018.

The plan calls for the certification of two pesticides with appeal for financial support and participation of the private sector and international partners.

The Food and Agriculture Organization FAO has already disbursed CFA120 million,the Minister  said during the launch.

Government hopes the program to be implemented for 18 months will  help put an end to ravages of the fall armyworm.

But these promises and plans  seem to do little to quell  the  fears and anquish of farmers and business operators in the sector.

« We hope the announced government plan in not just another talking therapy. We want to see it implemeted and get the results, » says Bernard Njonga.