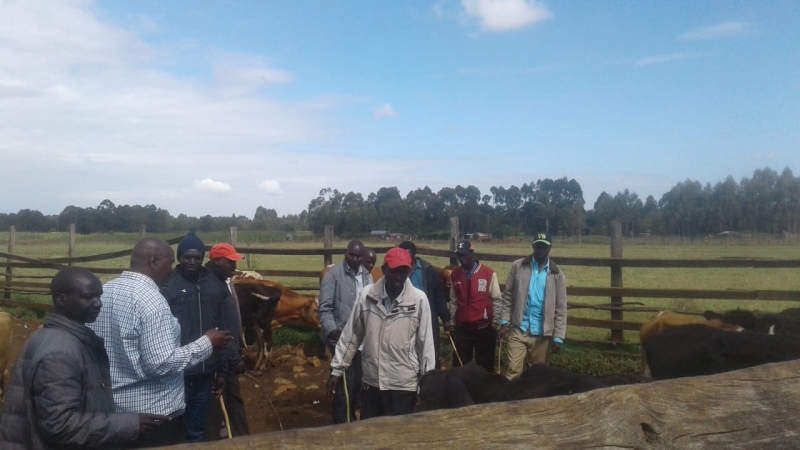 MAKHANDA, South Africa (PAMACC News) - A comparative study exploring the challenges farmers face in two cattle-farming provinces in South Africa and Kenya shows that trader or broker market control, prevalent in Kenya, should be avoided in South Africa as market access for farmers is improved.

It further identifies the Meat Naturally Initiative (MNI) in the Eastern Cape as a successful case study that, with proper co-ordination agricultural national extension office, could be replicated in both countries to tackle these challenges and increase the access and participation of small-scale farmers in beef markets.

The study, conducted by Professor Cyril Nhlanhla Mbatha, director of the Institute of Social and Economic Research (ISER) at Rhodes University, identifies poor production methods and limited market access as critical challenge clusters that prevent small African farmers in both countries from developing. In cattle farming in particular, poor grazing practices and a lack of vaccination produce poor quality animals. Limited information, poor infrastructure and cultural issues are some of the factors leading to low participation levels of these farmers in livestock markets.

The study compares how some of the common challenges in cattle production and market access have, to varying degrees, been overcome in both countries. Mbatha says that a higher number of rural South African farmers remain excluded from different parts of the value chains of formal beef markets compared to Kenya, and even though they own large herds of cattle, their contribution to the country’s demand for beef remains marginal. “Rural South African small farmers are generally faced with high production and marketing challenges, which prevent them from developing into successful commercial farmers. In terms of business operations, South African small communal farmers lack many of the prerequisite elements that make for innovative competitive markets. Many South African small farmers are still operating within mainly traditional systems with respect to livestock farming.”

Mbatha says challenges in managing livestock and in improving businesses also stem from the fact that there are many more farmers who own smaller numbers of herds, rather than fewer farmers owning bigger herds. “In limited capacities of communal grazing areas this would lead to conflicts among livestock owners on land management issues. This has a direct negative impact on the health and number of Large Stock Units raised per hectare of land. It also impacts markets, as buyers need to search for good quality product.”

Most studies agree that transaction cost issues are core to most challenges faced by small livestock farmers. “Costs of transporting stock to and from markets are a barrier. Ultimately these costs force farmers to adversely select themselves out of formal markets, which leaves them with limited prospects, says Mbatha.  “This gap is a clear opportunity for the agricultural extension office to coordinate these information flows.”

Mbatha says that while Kenyan small rural farmers face similar production challenges as those faced by their SA counterparts, they are more advanced in their level of participation in formal markets. However, the farmers’ lack of resources including infrastructure to transport animals to markets, has allowed an emergence of powerful traders who control markets to the detriment of poorly resourced farmers. “The Kenyan beef value chains are dominated by brokers, traders and butchers. There are persistent reports of high levels of collusion by fewer brokers, especially in the marketing stages of livestock.”

Mbatha says that even though the market domination by brokers is higher in Kenya compared to SA, Kenyan farmers are still better off. “In SA small farmers are almost completely excluded in the marketing stages of red meat, where big suppliers dominate the market. As the small farmer markets develop, it should be anticipated that brokers would emerge to occupy many spaces where obvious profits can be made and market issues like those observed in Kenya may develop, where market powers and prices are skewed against producers. Extension offices in SA must already develop strategies for bypassing any potential dominance of markets by traders to the abuse of farmers through prices in different regions of the country.”

The study identifies a successful case study in developing small African farmers that could be replicated across South Africa.  The Meat Naturally Initiative (MNI) in the Eastern Cape Province applies a holistic model through which many of the documented challenges in livestock farming for both countries could be reduced, or avoided. “This project has a holistic environmental approach to rural development, with rangeland restoration as one of its objectives. This project organised livestock auction markets for rural small farmers as one of its initiatives to incentivise farmers to participate in environmental protection efforts. Put simply, stakeholders work with traditional leaders to mobilise community members to restore and protect their ecological capital. The model rewards community members with economic incentives aimed at reducing poverty and improving their livelihoods, through participation in livestock-based enterprises.”

Mbatha says that while the MNI model seems sustainable if implemented as intended, only a small proportion of farmers currently benefit. Many parts of the project and its approach to development need to be emulated for the benefits of more SA small farmers in other rural regions, a process that could be co-ordinated through the national agricultural extension office.  Mandated to assist small farmers, it holds the required national footprint and shares many of the developmental objectives of the project to promote the lessons across the country.

“If the useful lessons from the model are not deliberately spread across the country, as small farmer markets develop on their own, many of the bad structural elements of such markets may creep in. The Kenyan study illustrates well what some of these elements could be with respect to potentially rising farmer abuses by traders or brokers.”

Prof Cyril Nhlanhla Mbatha is the director of the Institute of Social and Economic Research (ISER) at Rhodes University, a dynamic African hub of pioneering research that is opening gateways for community-rooted knowledge to be incorporated in policy and practice aimed at improving the natural environment and quality of human life. Former acting Dean and CEO of the Unisa School of Business Leadership and the first Director of the Young African Leaders Initiative (YALI),  Prof Mbatha has been a senior research consultant on topics including Public Finances Management, Labour Markets & Further Education and Training, International and Regional Trade Integration for government departments and research councils in South Africa and international donor organisations like the UNDP in Botswana and the World Trade Organisation.