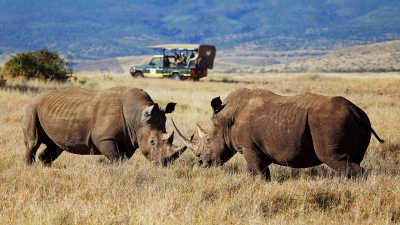 For the first time in history, Kenya counts all its animals on both land and water to help with its conservation and tourism plans

Themed ‘Count to conserve’, the census conducted between May- July 2021 counted over 30 species of mammals, birds and marine species in various ecosystems, covering nearly 59 percent of Kenya's land mass.

According to the report, Kenya has a total of 36,280 elephants, a 12-percent jump from the figures recorded in 2014, when poaching activity was at its highest.

Speaking during a press briefing at the IUCN World Conservation Congress in Marseille, Hon. Balala said: “This national census is the first wildlife survey of its kind and scope in Kenya. It is fully financed by the Kenyan government. Obtaining this level of information allows for better policy, planning and assessment of areas that require focus in our interventions to maintain or improve our national conservation efforts"

Kenya in East Africa is home to vulnerable and endangered species that include lions, elephants, giraffes and rhinos. It is also a transit route for migratory whales, dolphins and endangered turtles.  In March 2021, The International Union for Conservation of Nature (IUCN) warned that poaching and habitat destruction, particularly due to land conversion for agriculture, was devastating elephant numbers across Africa.

“The results of the census report could greatly improve Kenya’s conservation efforts for future generations. Kenya, like several of its African peers, is trying to strike a balance between protecting its wildlife while managing the dangers they pose when they raid human settlements in search of food and water.” said Kenya Wildlife Service Director General Brigadier (Rtd) John Waweru

Congratulating Kenya for this great milestone, IUCN Regional Director for Eastern and Southern Africa, Luther Anukur said: “IUCN is honored to have Kenya and other Africa State Members participate at the World Conservation Congress in Marseille. This forum allows for government, civil society, indigenous peoples, business, and academia to share experiences and explore opportunities for collaboration. Kenya’s example is one that will inform policy and action towards wildlife conservation. It is an example that many countries in Africa can learn from.”