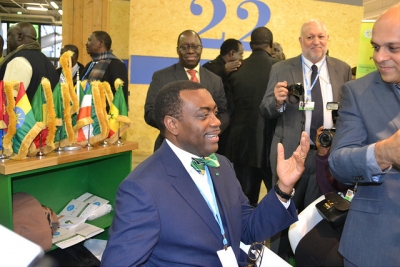 AfDB is implementing a promis annunced in Paris

The African Development Bank, (AfDB) has unveiled a new action plan for 2016-2020 in pursuant to its ambitious vision to accelerate the continent’s economic transformation and the fight against climate change.

“We need to build technical skills so that African economies can realize their full potential for adaptation in high-technology sectors,” said Kapil Kapoor, acting vice president, sector operation at the African Development Bank, during the official opening of the 6th Conference on Climate Change and Development in Africa, CCDA-VI, October 18,2016 in Addis Ababa- Ethiopia.

Under the new plan the African Development Bank will nearly triple its annual climate financing to reach 5 billion a year by 2020.

The Bank, said the vice president, has taken some initiatives geared at pursuing and driving growth in agriculture, which will complement investment actions and commitments of African countries as expressed in their National Determined Contributions, NDCs.

Citing some of the investment support initiatives, AfDB officials pointed at climate and disaster resilience programmes in many drought stricken African countries. For example the drought resilience projects in Djibouti, Ethopia and Kenya and the horn of Africa that received some 125 million US dollars. A similar project worth 231 million dollars was supported in the Sahel to control drought.

Only recently the Bank approved over 500 million US dollars to support the fight against the effects of El-Nino that hit many parts of Eastern and Southern Africa.

The Bank also revealed it was working through partnerships with other Banks and insurance providers across Africa to bring greater access to insurance and risk financing in order to leverage lending for agriculture to the tune of I billion US dollars.

“We understand that this cannot happen unless insurance and finance providers have access to reliable and quality climate and weather information that allows them to calibrate their risk models and design appropriate insurance package for agriculture,”  Kabil Kapoor said.

Development experts called on African countries to review and revise the INDCs with a view of addressing the different challenges including that of infrastructure.

“There is urgent need for African countries to review and revise their NDC’s to meet the challenges of the Paris agreement,” said Dr Abdalla Hamdoc, deputy executive secretary and chief economist of UNECA.

According to officials on the United Nations Economic Commission for Africa, UNECA, increasing levels of ambitions where appropriate will not be easy for many African countries given the complexities of ensuring adequate and reliable data, mainstreaming climate change into national development imperatives, ensuring coherence between climate change goals and the various sectoral goals and ensuring adequate funds for the process.

The sixth CCDA accordingly has been convened under the theme “The Paris Agreement on climate change, what next for Africa?”

The conference officials say, is built on the fifth conference on climate change and development in Africa, which was held in the lead-up to the twenty-first session of the conference of parties to the United Nations Framework Convention on Climate Change, COP21.