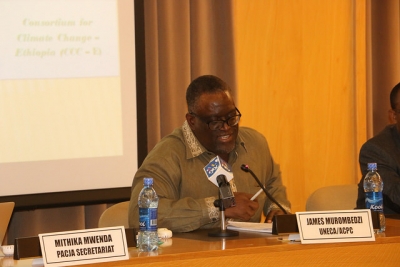 ADDIS ABABA, Ethiopia (PAMACC News) - “The Paris Agreement is somewhat weak in terms of how African countries will attract the required investments to deal with the challenges of climate change…,”says James Murombedzi, Officer in Charge of the Africa Climate Policy Centre of the United Nations economic Commission for Africa (UNECA).

While heralded as a landmark global deal on climate change, there remains a feeling of impotence from the Africa group on certain nuances of the Agreement and its implications to the continent’s development agenda.

However, signing and ratifying the Agreement is not optional for Parties as it was universally agreed by the then 196 members to the United Nations Framework Convention on Climate Change—UNFCCC, in Paris last year.

This therefore implies that whatever issues Africa has with the Agreement and its implications, would have to be dealt with at the negotiating table, and this is the point at which the Young African Lawyers (YAL) Programme becomes crucial.

Established under the ClimDev-Africa Programme, YAL has the overarching goal of strengthening Africa’s negotiating position and ensuring Africa gets the best at the UNFCCC processes.

“Signing and ratifying the Agreement is not optional for us as Africa,” says Natasha Banda, a young Legal Practitioner from Zambia, one of the mentees under the programme.

Being part of the legal advisory team for the Zambian negotiators through the UNFCCC country Focal point person, Banda believes ratifying the Agreement is not negotiable and the starting point “because the nature of international Agreements is that you cannot have bargaining power from outside,” and is certain that Zambia, which is yet to ratify, would do so once all necessary processes are complete.

In recognition of the importance of addressing the impacts of climate change comprehensively, and the unique roles and responsibilities of lawyers in the process, the Young African Lawyers (YAL) programme brings together young and motivated African lawyers in integrating climate change responses into Africa’s development agenda.

According to Dr. Johnson Nkem, Senior Climate Adaptation Expert with the Africa Climate Policy Centre, and Coordinator of the programme, YAL is a crucial component for Africa’s climate governance framework, especially now that the world is moving towards a greener, cleaner future, as espoused in the Paris Agreement.

“While providing essential legal support to the AGN, the YAL programme is an important foundation for developing a cadre of African lawyers who are fully engaged in wider climate change issues. Legal advice on low-carbon trading transactions, for example, or integrating climate change into Environmental Impact Assessments are going to be increasingly important as the world heads towards a greener, cleaner future. As Africa anchors itself firmly in this global transition, the YAL programme aims to nurture the legal skills that will be integral to this process,” Nkem explains.

As well as the immediate benefits of providing legal support at the climate negotiations, YAL has the longer-term goal of building the expertise of young lawyers, to be applied in broader aspects of climate change policy and law.

And Rachael Rwomushana, a Ugandan Lawyer, testifies to the positive impact that the programme has had on her and on the country’s engagement in the UNFCCC processes.

Uganda is one of the African countries that has ratified the Paris Agreement, and Rwomushana believes she played a positive role as a young lawyer working in the office of the Attorney General.

“Being involved in the this programme has enabled me to better understand the process and the guidance that I can give to my country and the African Group of Negotiators in the process,” she says, stressing that African countries should not look back on the Paris Agreement but work to strengthen their climate governance so that they get the best out of it.

Under the guidance of two seasoned lawyers experienced in Multilateral Environmental Agreements such as Dr. Seth Osafo, former senior legal adviser of the UNFCCC Secretariat, and Matthew Stilwell, a climate change expert and legal adviser to the African Group of Negotiators, the YAL programme could be Africa’s hope for better climate governance engagement in the years to come.

With the availability of additional resources and support, the programme plans to expand to other interested participants and legal institutions across Africa in developing the knowledge-base of legal experts on climate change issues.