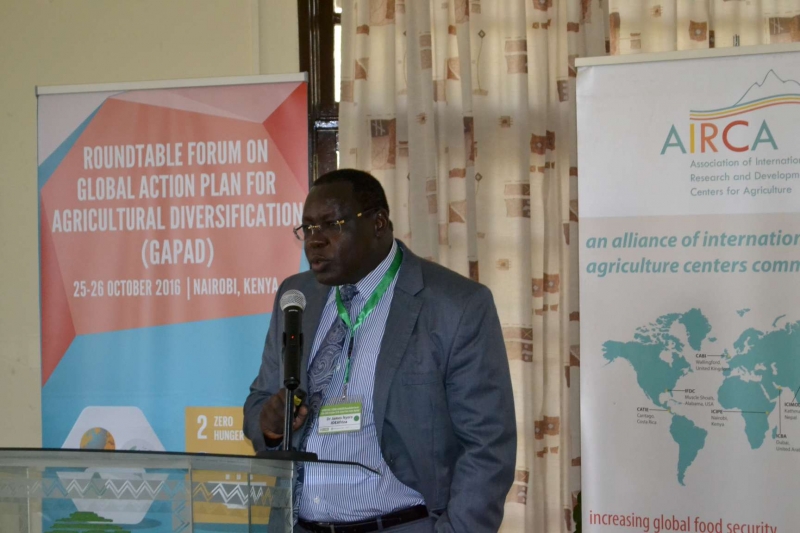 NAIROBI, Kenya (PAMACC News) - Experts drawn from different institutions under the umbrella of the Association of International Research and Development Centres for Agriculture (AIRCA) have commenced on a journey towards implementation of Sustainable Development Goal number 2 (SDG 2), which calls for diversification of agriculture and nutrition.

During the 21st session of negotiations on Climate Change – Conference of Parties (COP 21) in Paris, France last year, research leaders agreed on a Global Action Plan for Agricultural Diversification (GAPAD) to address sustainable development through agricultural diversification beyond only major crops.

However, Dr James Nyoro, an agricultural economist, formerly a Senior Food Security and Climate Change Advisor to the Presidency – Government of Kenya, has warned that such efforts will terribly fail, if there will be no political goodwill.

Nyoro told agriculture and nutrition experts during a roundtable event organized by CAB International in Nairobi that there is evidence to show that where the government takes the driver’s seat, and sets the agenda for agricultural development and transformation, there has always been a positive change.

“Majority of our governments today have no political goodwill for the agricultural transformation agenda,” said Nyoro. Unless that is addressed, he added, “We can hold these meetings until cows come back home,” he said.

He referred to a recent report released during the 2016 African Green Revolution Forum (AGRF), which showed that countries that adopted the policies promoted by the Comprehensive Africa Agriculture Development Programme (CAADP) not long after it was created by African Union governments in 2003 saw productivity on existing farmlands rise by 5.9 to 6.7 percent per year.

By contrast, countries that sat on the sidelines saw farm productivity rise by less than 3 percent a year and Gross Domestic Product by just 2.2 percent, said the Africa Agriculture Status Report 2016.

It was in the same regard that Her Excellency Mrs Rhoda Peace Tumusiime, the Commissioner for Rural Economy and Agriculture at the African Union Commission observed that key indicators of success and likely impact of GAPAD will be the number of countries that endorse the plan, along with the number that elect to develop a National Plan of Action for its implementation.

“The Paris Climate Agreement has given us a clear roadmap for sustainable development in the years to come, but without meaningful implementation on the ground, these goals will [only] remain aspiration in nature,” she said.
John Feakes, the Australian High Commissioner said that given the changing global climatic conditions, countries cannot afford to get it wrong. “Climate is changing, and it is posing significant challenge to achieving sustainable development,” said Feakes. “Many decisions being made today have long-term consequences and are sensitive to climate conditions – water, energy, agriculture, fisheries and forests, to name but a few. We simply can’t afford to get it wrong,” he told the experts at the GAPAD meeting.

Dr Dennis Rangi, Director General, Development, CAB International, noted that there was an immediate need to diversify and supplement the only four crops that feed the whole world.

“From over half a million plant species on the planet, we currently rely on  wheat rice, maize and soybean for more than three-quarters of our food supply,” he said noting that the crops are grown in a limited number of exporting countries, usually as monocultures, and are highly dependent on inputs such as fertilisers and irrigation.

“With climate change, these crops alone cannot feed a hotter world. We need options for agricultural diversification that include a wider range of crops and cropping systems,” said Dr Rangi.