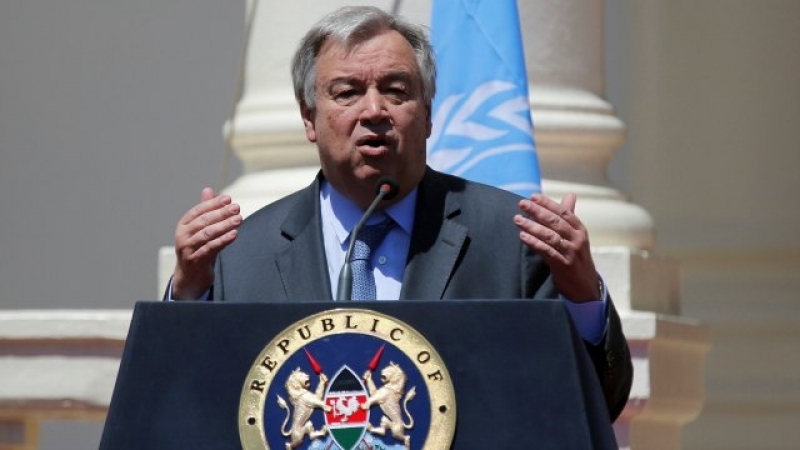 NAIROBI, Kenya (PAMACC News) - Eleven Kenyans who say they have been unceremoniously sacked by their boss at the Kenya-based UN Habitat have appealed to the visiting UN Secretary General Antonio Guterres to intervene and reinstate them.

The workers appealed to Guterres who is in the country and met with President Uhuru Kenyatta yesterday to rescue them from losing their jobs and pointed fingers at their boss Dr Joan Clos for their woes.

James Ohayo, the President of the UN-Habitat staff union noted that for many members of staff at the Nairobi Duty Station, integrity, professionalism, respect for diversity, accountability and transparency are clichés that ring hollow.

"When some of those who lead us routinely get away with glaring acts of impunity, blatant disregard for laid down rules and regulations, open violation of staff rights and privileges, reckless abuse of authority, and endemic corruption, nepotism, racism, and cronyism, our belief in the cherished core values ofour organization is severely tested," Ohayo said.

He said that this is happening at a time the Habitat III process, in which member states have invested huge resources and efforts to position and revamp the organisation in readiness for the New Urban Agenda.

"These initiatives may not yield much result as long as the current executive director who is feared and hated in equal measure remains. The implementation of the New urban Agenda will be shackled unless the current a top official  shown the way out of this vital organization," Ohayo said.

This comes at a time when the 2017 UN Global Staff survey released yesterday has ranked UN Habitat, a UN organization based in Kenya as the worst managed among its all organisations.

The survey ranks the best "UN departments and missions in which to work, which have the best leadership and in which do staff feel the most or least empowered.

Several such questions are answered in the report of the Global Staff Satisfaction Survey 2017, in which 4,000 of staff took part last week, representing ten per cent of the UN staff.

According to the survey findings, UN-Habitat polled among the worst and by most unethical.

"The agency performed well above expectations and enjoyed donor confidence and support until 2011 when it's financial and human resources began a precipitous plunge that up till date has greatly negatively impacting its normative and operational work. The bottom line is that the executive director simply failed to mobilize resources," the report says.

The report faults the Executive Director Dr Joan Clos for on numerous occasions admitting that he is unable to raise funds (a core requirement for success of a UN agency) but refusing to admit that he has failed to lead the organization.

"Compared with seven years ago, the organization can today be described as a pale shadow of its former self as it continues to suffer from among others: huge donor confidence crisis, loss of staff, more than 50 per cent of UN Habitat staff has been lost, corrosive demotivation due to poor and nepotistic leadership and the replacement of competent staff with consultants at the expense of in-house expertise," the report says.

The report's findings also faulted current plans to further sack staff since the conclusion of Habitat III unless there is a direct intervention by member states.

"Recently, 11 staff members have received notification of contract termination on various dates around March 2017. This prompted an alarmed workforce to raise the matter with Clos on the effect of the diminishing staff levels on the implementation of the mandate of UN-Habitat which he always assures is on course despite facts to the contrary," the report said.

The report accuses Clos of mistreatment of staff members and victimization of staff, who at times hacks and reads emails of staff members, a practice contrary to UN's individual privacy rules and in direct violation of the rights of staff.

"Most staffs are unsure how safe their private thoughts are and are apprehensive of the future when such violations are carried out with impunity. So far about three senior staff members that is known have now been under the surveillance of Clos' office; a very frightening development to say the least.

The leadership of UN-Habitat rather than give comfort to its staff constantly puts them in fear," the report says.

Kenya is the only country with UN headquarters outside the industrialised West. Addis Ababa in Ethiopia and other centres are regional headquarters. If the headquarters is closed or relocated, Kenya will lose a major source of revenue big time.

The 2015 report of the Office of the Internal Oversight Services (OIOS) also cast a picture of an incompetent management which has caused the organization dwindling fortunes.