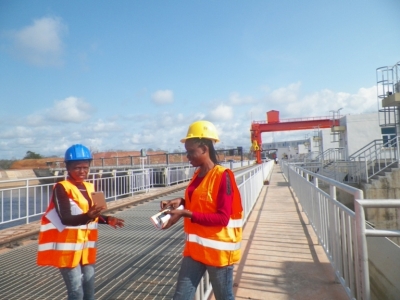 YAOUNDÉ, Cameroon (PAMACC News) - Cameroon is witnessing significant progress in its electricity and transport infrastructure development in the last few years, but for lack of financial and technical knowhow, the impetus is coming from China, government authorities say.

According to Cameroon’s minister of the economy, planning and regional development, Louis Paul Motaze, many planned infrastructure projects geared at driving double digit economic growth by 2035, lay the building blocks for attaining the UN Sustainable Development Goals(SDGs),  that had been treading water in the last decade have since taken off thanks to financing opportunities from Chinese banks.

“We are grateful to our partners from China for regularly providing financial support to boost the much needed infrastructure projects in Cameroon,” says Louis Paul Motaze at the signing of two framework agreements worth 973 RMB in Yaounde September 22, 2017.

Government says China has become its prime investment partner in energy and road infrastructure since the launch of the country’s economic development programme dubbed Vision2035.
The project is geared at eradicating poverty and help the country become a middle income country with a double digit economic growth.

“It is about enabling our country to reach a level of development such that every Cameroonian can live decently on his work, raise his children properly, and have decent housing and protection from disease,” President Paul Biya said at his end of year address to the nation in 2014.

In the East and South region of the country, Chinese firms have undertaken several energy and transport infrastructure projects that are changing the lives of the population.

In 2015 a solar power station project constructed in Nvogmeka,the village of the President of the Republic,Paul Biya, by Huawei Technologies Company Cameroon Ltd. in Cameroon's South Region today provides energy for the over 15,000 villagers. The project constructed in two phases provides energy capacity of 72 KW. The population say the project has since brought measured hope.

“It is a miracle that we are getting energy for our businesses from the sun. Now we too can fight unemployment with business activities like those in the city,” admits Jules Atangana who now operates a beer palour in Nvogmeka.

Statistics from the government show that over 60% of villages in Cameroon have no electricity, due to the cost of connecting with national grid. But with the coming of renewable energy, the trend is changing, the minister says.
Like Mvogmeka, Huawei has provided new solar power station projects for 166 villages in Cameroon, bringing benefit to more villagers in the country.

Other Chinese-sponsored renewable energy projects include the  409 solar panels constructed in 2013 and today lighting Ngousso and Soa in the Centre region in Yaounde costing over 1.5billion FCFA. The Kribi Gas Fired Plant that is already producing 216 MW of energy in the country.

In the hydro-electricity sector, the first phase 6 billion cubic-metre capacity reservoir dam of Lom Pangar  in Cameroon’s East Region constructed by a Chinese firm, China Water and Electric Group has been completed. The project government says cost some 494 million USD.

Lom Pangar Hydropower Project is expected to increase hydropower generation capacity, reduce seasonal variability of water flow in the Sanaga River and increase access to electricity. The dam is 46 meters high and 7 meters wide at the crest. The Lom Pangar Power Plant and Transmission Line 30 MW hydropower plant consists of four Francis turbines constructed at the foot of the dam.

The construction of the Memve’ele hydro-electricity dam in the South region has also brought significant progress in the region.
Constructed by Chinese company Sinohydro Corporation Limited, Waffo Narcisse head of environment pole and on-site manager of the dam project said the construction works on the energy infrastructure “have been completed.”

Jointly financed by China Eximbank and the government through a FCFA 243 billion loan solely for the construction of the dam, the energy infrastructure is expected to inject an additional 201 MW of electricity into the national energy supply network and contribute to narrow the country’s electricity capacity deficit.

The coming of the multibillion-Franc Memve'ele Hydroelectric Dam with socio-economic development projects has brought pointed hope and measured blessings not only to the indigenous community of the project village Nyabizan but the entire Ma’an subdivision in the Ntem Valley Division of the South region.

The population says the energy infrastructure is manna from heaven.

“The coming of the Memve’ele dam is a special gift from God. It is like turning darkness into daylight,” says Obam Ghislain an indigene of Nyabizan village.

A striking development brought by the dam is the rapid population surge in Nyabizan village from about 200 in June 2012 during the launch of construction works, to more than 2,500

In addition to hydro-electricity, Chinese support is also driving road infrastructure development in the country. Cameroon has a pivotal place within Central Africa’s economic grouping, providing important access routes to sea ports on the Gulf of Guinea for its landlocked neighbours. Recent developments in  road and rail networks are set to drive the region’s economic growth experts say.

“The government has been implementing a massive public investment programme including roads, deep-sea ports to meet  the country’s plan for double digit growth,” says Paul Tasong, Commissioner in Charge of Economic, Financial & Monetary Policy for the Central African Economic and Monetary Community (CEMAC).

The road currently servicing the deep-water port of Kribi, the largest port structure in Cameroon for example, will be served by a motorway from 2018. The completion rate of this 38.5-km long motorway built by the Chinese company CHEC is over 66%, according to the management of the operational unit of the Kribi port complex.

Based on projections made by the government, the Kribi-Lolabe motorway will later join the Edea-Kribi motorway, thus enabling vehicles to easily reach the deep-water port of Kribi from Douala, the economic capital of the country.

Another road infrastructure construction works going on by the Chinese company is the Yaounde-Douala (first stretch of 80 km) and Yaounde-Nsimalen (20 km to service the Nsimalen airport in Yaounde) motorways, the Kribi-Lolabe highway all expected to be completed by 2018.

According to government, the global cost of this highway project is officially estimated at FCfa 250 billion, with 86% of the funding provided by Exim Bank of China, and 15% from the State of Cameroon.

Chinese company China Road & Bridge Corporation, also got the contract worth FCfa 8.6 billion in total in 2016 to build the Logpom-Logbesou-PK 14 road in the city of Douala, the economic capital of the country.

The construction works to be undertaken in 24-months period according to the minister of public works Emmanual Nganou Njoumessi will also be completed by June 2018.

Many development partners have joined the Cameroon government to hail China’s support to the multiple development drive. However some civil society and economic experts say Cameroon’s over dependence on China for funding has led to increase oversights on Chinese-linked activities especially in natural resource exploitation. Others have criticized the surge in Cameroon’s debt in recent years as a result of the open door policy of Chinese supported funding.

“The over dependence by Cameroon on China for funding has not only increased the country’s debt burden but has also increased the presence of Chinese business operators in virtually all sectors in the economy,said Bernard Njonga, coordinator of Cameroon-based NGO Support Service for Local Development Initiatives (SAILD).

In a June 2016 report, the World Bank noted that Cameroon’s debt levels had increased markedly and another 2015 analysis prepared with the International Monetary Fund put the country at high risk of debt distress.

Statistics from the government shows that Chinese supported investment in Cameroon is worth two and half times more than all other sources of foreign support. About 80% of these investments are in infrastructure such as roads, water, electricity, seaports with funding coming from Chinese private as well as public banks like the China Exim Bank and China Development Bank.
Between 2008 and 2015, China granted loans to Cameroon worth 3 billion US dollars (1,648 billion FCFA), mainly forinfrastructure, road construction and telecommunications development.

Cameroon's minister of energy, water and electricity, says the demand for electricity is expected to increase by between 7 percent and 8 percent yearly, necessitation the need for technology transfer to better empower local engineers address these growing needs in the future. He thus lauded the technical expertise in the electricity engineering and road construction sector brought by the different Chinese firms.

“The transfer of Chinese technical knowhow to locals will ensure sustainability to better address infrastructure needs in the future,” Atangana Kouna noted.

About 600 million Africans still live without electric power. But that can be cut to zero with newly acquired skills in the extension of national grids, building local micro-grids and installing solar home systems by home based engineers, the minister said.
Win-win Partnership

Chinese officials say the open financial support for infrastructure development in Cameroon in particular and Africa in general is embedded in its win-win economic development policy.

The Chinese Ambassador to Cameroon, His Excellency Wei Wenhua says his country has opted to stand by Cameroon in a win-win development policy.

“Both Cameroon and China have decided to support each other and are confident they will reap the benefits of their cooperation ties,” says Wei Wenhua in a meeting with Cameroon’s Sports and Physical Education Minister ,Bidoung Mpkwatt on September  9th 2017 in Yaounde.

Zhang Shuo of the Concessionary Loan Department told the press in Yaounde recently that both Cameroon and China derives benefit in all financial transactions they engaged in.

“The win-win aspects is very important in all financial agreement we carry out,” Zhang said. She said it was to reinforce the win- policy that Export-Import (Exim) Bank of China has announced a change in financing policy in the Forum on China-Africa Cooperation, FOCAC projects in Cameroon.

"It was recommended that Chinese companies not only execute Forum on China-Africa Cooperation, FOCAC projects financed by Exim Bank of China, but should henceforth participate in investing and running them," she explained.
According to Zhang Shuo, the measure is meant to help raise the sense of responsibility of Chinese companies vis a vis the beneficiary African countries.

Embodying the principle of mutual benefit, China has consistently combined the extension of financial assistance for infrastructure construction in Africa with the expansion of Chinese business interests and the pursuit of resource security goals she says.
Finance from Chinese Bank according to other reports has also contributed to the internationalization of the renminbi. Though the currency is not convertible on international markets, for the most part, the Chinese Communist Party leadership is keen to give it a role beside the euro and the US dollar.

This report was produced as a result of a grant provided by the Africa-China Reporting Project managed by the Journalism Department of the University of the Witwatersrand.