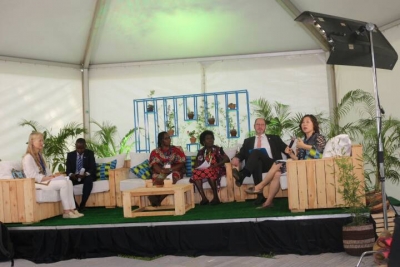 The women groups under the umbrella of the Women’s Major Group (WMG) made the call at a side event on the challenges facing women’s environmental rights defenders.

“Since the effects of pollution outlive all of us, we want a fast-response civil society advisory committee and the strengthening of UNEP’s safeguards and human rights policies if really we are to leave no one behind,” the women groups said.

Identifying 2017 as the deadliest year for women’s environmental rights defenders, the women called for increased protection of their rights to indigenous land and resource ownership as they face increased crackdowns, violence, threats, intimidation and murder by state and non-state actors.

The Women’s rights group also paid tributes to women who lost their lives this year while highlighting the important role of women rights defenders in creating a pollution-free future.

Helen Hakena, Leitana Nehan Women’s Development Agency, Papua New Guinea said, “We have suffered a 20-year war, which has had a terrible impact on Women.

“62% of the men confessed to having raped women. Even though the war has ended, women still face immense aggression from the conflict of resources on our land, where an international mining company operated the largest open pit mine in the world,” she said.

“The Panguna mine has destroyed and polluted our land, forest, rivers and food sources, and seeps all profits away, Nehan added”

Priscilla Achakpa of the Women’s Major Group revealed that about 200 women’s environmental rights defenders have been assassinated within the past 12 months, mostly killed over land and forest conflicts.

“Only last week, we lost Elisa Badayos from the Philippines. But these conflicts are greatly aggravated by pollution,” Achakpa said

“Pollution is not incidental but a deliberate and inevitable consequence of a profit-oriented economy of mass production of harmful plastics, pesticides, and fossil fuels,” Priscilla Achakpa added.

Apart from this, the WMG chief said Nigerian women are exposed to hazardous chemicals every day.

“Samples of human breast milk obtained from Nigeria were found to have high levels of Persistent Organic Pollutants. A study found over 15,000 metric tonnes of pesticides per year were imported into the country between 1983 -1990,” Achakpa said.

In Kenya, some 5000 people are exposed to Mercury pollution in Artisanal Small-scale Gold Mining sites.

“Mercury is banned under the Minamata Convention, negotiated here at UNEP but in the impoverished community that I’m working with they don’t have much option,” says Griffins Ochieng from the Centre for Environmental Justice and Development (CEJAD), a Kenya based NGO.

“Mining gold and mixing it with mercury is the only knowledge they have and the main source of income. Communities do not have access to information about the hazards of using mercury. We need our government to stop mercury trade,” Ochieng added.