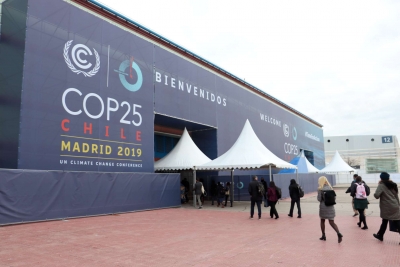 MADRID, Spain (PAMACC News) - A new study that was recently published in the Nature scientific journal shows that groundwater is one of the most climate resilient natural resources especially for the African continent. This is contrary to the earlier understanding by the Intergovernmental Panel on Climate Change (IPCC)’s Fifth Assessment Report , that groundwater was susceptible to climate change in dryland areas.

Though it was not a big subject for major discussions at the 2019 UN Conference of Parties (COP25) on climate change in Madrid, experts believe that groundwater will be at the centre of climate adaptation particularly for African countries.

Richard Taylor, a Professor of Hydrogeology from University College London (UCL) and one of the lead researchers of the Nature study explained to IPS why groundwater should be a focal point for climate discussions.

Q. How important is groundwater to climate change adaptation especially in Africa?

A. Groundwater plays a fundamental role in enabling communities in Africa to adapt to climate change. As our world warms, rainfall becomes less frequent but more intensive resulting in longer droughts and worsening floods - changes that occur most strongly in the tropics.

Adapting to this greater variability in water resources relies on the ability to draw water from stores such as groundwater or to store water in dams for example.

Groundwater, which comprises 99 percent of the Earth’s liquid water, amounts to more than 100 times that of annual river discharge in Africa.

For cities in Africa that have recently experienced severe droughts such as Cape Town and Dar es Salaam, groundwater has played a critical role in enabling residents in those cities to adapt to water scarcity.

Less frequent rainfalls also reduce crop yields. Increasing cropland irrigation is a critical strategy to improve food security in Africa under climate change. As smallholder farmers account for the vast majority of food production in Sub-Saharan Africa, distributed groundwater supplies are often the most cost-effective and sustainable sources of water for irrigation.

Q. How resilient or vulnerable is groundwater to climate change?

A. Groundwater resources are generally resilient to climate change. Recent evidence from a pan-African study shows that replenishment of groundwater occurs preferentially from heavy rainfalls so that changes in rainfall brought about by climate change favour groundwater replenishment. Alas, these same changes in rainfall reduce soil moisture and lead to greater and more frequent flood events.

Q. Why do you think this subject has not been able to attract the attention of climate change negotiators for the past 25 years of negotiation?

A. That is a good question. Groundwater is often called the hidden or invisible resource as it lies unseen beneath our feet. Limited understanding of groundwater by both policy makers and engineers means that it is often considered mysterious or unknowable.

The impact of climate change on groundwater resources has been largely ignored by the climate change community until last year when it was captured in the IPCC Fifth Assessment Report.

This is surprising in light of the critical role groundwater plays in sustaining rivers, lakes and other aquatic ecosystems during low or absent rainfall.

Q. What do you think should be done to bring the groundwater subject to the helm of climate negotiations?

A. There is need for raising awareness of the critical role of groundwater to improving the resilience of water and food systems in Africa in relation to climate change.

It is in that regard that scientists from different parts of the world are issuing a Call to Action this week, through a statement published in the Nature journal, which argue that we are not doing enough to protect and manage global groundwater resources, which will have long-term effects on the planet’s drinking water, food production, and adaptation to a rapidly changing climate.

This statement focuses on the global role of groundwater in relation to the 2030 Agenda for Sustainable Development, the Paris Agreement on Climate Change, the Framework for Action on Groundwater Governance, and the Sendai Framework for Disaster Risk Reduction.

It builds on previous important declarations and statements, including the Valencia declaration on Intensive Groundwater Use (2002), the Kampala statement on Groundwater and Climate in Africa (2008), ISMAR9 call to Action on Sustainable Groundwater Management Policy Directives (2016).

This call has so far been endorsed by over 700 scientists and practitioners in over 80 countries and is timed to coincide with the United Nations (UN) Climate Change Conference in Madrid (COP 25) and the beginning of the Decade of Action on the UN Agenda 2030.

Q. What kind of policies should African governments put in place in order to ensure sustainable use of groundwater?

Two, they could integrate groundwater into its evaluation and governance of water resources more holistically that is currently dominated by concern for surface waters.

In light of the central importance of groundwater to adaptation to climate change, African governments could use support under the Green Climate Fund to finance the implications of these policy recommendations.