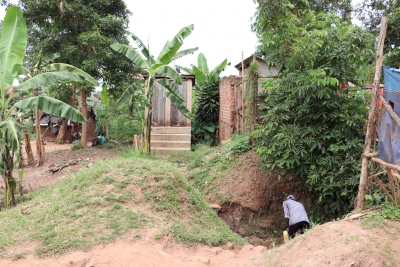 A man fetching surface water from a spring in Makerere. In the background are two pit latrines : >> Image Credits by:Isaiah Esipisu

KAMPALA, Uganda (PAMACC News) - After a recent study discovered traces of dangerous viruses including cancer causing pathogens in shallow groundwater in Kampala slums, residents of Makerere 2 Zone C can finally breathe a sigh of relief as further studies indicate that deeper groundwater in their area could be safe for drinking.

In collaboration with a community based organisation known as MAK H2O Project, scientists from IHE Delft Institute for Water Education together with their counterparts from Makerere University have been working with communities to find out the best way of managing their groundwater in a sustainable manner.

“As a short term measure, we have been encouraging community members to boil the water from slum springs before drinking,” said Brian Lutaaya, the Chair – MAK H2O Project.

Most of the water springs in Makerere 2 Zone C are just a few meters from pit latrines, a clear indication that the water, which appears to be sparkling clear, is likely contaminated with fecal matter. The water is fetched from an open earth surface. This makes it susceptible to all manners of waste contamination brought around by wind, rainfall runoff water and even malicious individuals.

“We are fully aware of the dangers involved, but we have no alternative source of water for drinking and for domestic use,” Edith Kansiime, one of the area residents said during a field visit by UPGro delegation to the 2020 Africa Water Association (AfWA) International Congress.

Taps in most parts of the slum went dry some years ago. The only available alternative is to buy mineral water from the shops, which is too costly for most of the slum dwellers.

As a result, the surface water has exposed them to several disease causing pathogens, some which are life threatening.

A recent study by IHE Delft Institute for Water Education in collaboration with scientists from universities in Uganda and Tanzania discovered traces of 25 different harmful viruses in surface water in the slums of Kampala and Arusha.

The study, whose findings were presented at the Assembly of the European Geosciences Union (EGU) in Vienna, Austria, found that most groundwater in the two slums contained traces of herpes viruses, poxviruses, and papilloma-virus. The latter could be one of the causes of different types of cancers in the region.

Cancer is one of the lead killer diseases in the East African region, claiming about 100,000 lives every year.

According to Lutaaya, the condition of spring water in Bwaise in Kampala, where the study was conducted is not different from the situation in lower Makerere slums.

“To our knowledge, these viruses have never been found in groundwater before on such a large scale, perhaps because there has never been an in-depth analysis,” said Dr Jan Willem Foppen, one of the researchers.

To support the communities, the scientists have been conducting experiments to understand the nature and safety of groundwater in these slums.

In lower Makerere slum for example, the research scientists through the UKaid funded UPGro programme, in a project known as T-GroUP, the scientists have sunk two boreholes, one with a shallow depth of just three metres, and another with a depth of 25 metres.

The researchers have been monitoring the water quality in both boreholes for a number of months, and the early indication is that the deeper borehole has much safer water compared to the three metre shallow borehole.

“We have not concluded this study, but there is an indication that deeper groundwater is likely going to be the solution for thousands of residents in this slum,” said Dr Foppen.

Through the T-GroUP, the scientists have been experimenting with practical transition groundwater management strategies for the urban poor in Sub Saharan Africa. They employ the Transition Management theory to find radically new and collaborative ways of using and managing urban groundwater.