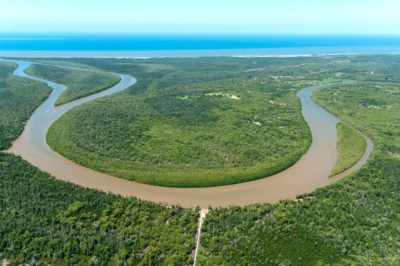 Several dams and hydro-power schemes are being considered for development in Tanzania’s Rufiji River Basin.
DAR ES SALAAM, Tanzania (PAMACC News) - Building a large dam to feed into a hydro-electricity power plant in a river basin will always result in trade-offs, as sectors such as urban water supply, rural food production and ecosystem services compete with a country’s growing energy demands. Infrastructure built now will have an effect on the system long into the future, when climate change impacts are likely to manifest.

In light of these challenges, how should river basins be designed?

UMFULA is working with water researchers and managers in Tanzania to address such questions. The team, led by Professor Declan Conway (London School of Economics), is generating new insights and understanding about climate processes and extreme weather events, and their impacts on water, energy, and agriculture.

The project results are becoming available just as work begins on building the Julius Nyerere Hydropower Project (JNHPP) on the Rufiji River, earmarked for a site about 200km south of Dar es Salaam. For the first time, researchers and planners are considering these trade-offs in detail, and assessing how they might evolve with climate change across the Rufiji River Basin.

The ability to create computer simulations of the river basin will be made available using a new river basin management model called ‘Python water resources’ or ‘Pywr’, and will be applied to the Rufiji River Basin in Tanzania. Rather than using a model that needs to be installed via proprietary software, the open-source model will be available to project members and stakeholder partners online through a website. Both the model and its website are generalised tools, applicable to any region but are applied to Tanzania in this project.

The tool is designed to support longer-term water management decisions upstream and downstream of the dam linked with the JNHPP scheme. It can also inform infrastructure planning across the basin, where other hydro-schemes and dams are under consideration for development.

There are complicated interactions in a river basin system, where demands for water, food production, and energy intersect with environmental needs, explains Prof. Julien Harou (chair of water engineering at the University of Manchester, United Kingdom) who is spearheading the application of this new FCFA-funded online systems-based assessment tool.

A system-scale assessment approach can help identify tradeoffs between different water needs so that decision-makers can better understand the impact of water and hydro-scheme infrastructure development in the basin, and make better-informed water management decisions in other sectors, such as agriculture.

One anticipated demand on water in the Rufiji River Basin is from agricultural irrigation, much of which is drawn off the river by unregulated water users, which will increasingly impact on water flow in future. Another area for consideration is the possible impact that dams and hydro-schemes will have on water flow downstream of each development including the impact on wildlife and ecosystems associated with riverine and estuarine edges such as wetlands, floodplains, riverine forests, and mangroves.

This online tool will allow stakeholders to conduct basin-wide assessments to consider contested demands for water and can help identify infrastructure opportunities or inform operational policies to balance potential benefits and impacts according to Harou. It could also help different sectors better coordinate water management and infrastructure development decisions.

The first iteration of the tool, which will be further refined by Prof. Japhet Kashaigili of the Sokoine University of Agriculture and Tanzania’s Rufiji Basin Water Board, allows for a basin-wide assessment of the tradeoffs between sectors with competing water needs, as well as the possible synergies. The next step of the tool’s development is to include UMFULA project data that will allow estimating future impacts of climate change. Climate change is expected to alter temperatures, evaporation rates, and rainfall patterns across the river basin in coming decades and will impact water availability in the catchment.

The Julius Nyerere Hydropower Project will involve building one of the largest dams in East Africa, explains Harou, and stakeholders have already identified the main tradeoffs that this project will involve. This includes competing demands for irrigation taken from the system, much of which is removed from the river informally by farmers and the impact on the Nyerere National Park which is upriver of the JNHPP dam and where about 2 per cent of the park is expected to be flooded once the dam is completed.

Computer modelling of river basins is technically complex and usually only accessible to a small scientific community. This new tool is part of an effort to open up strategic river basin planning to a wider community of stakeholders involved in governance and water management in the region including; government, researchers, and civil society organisations.

The work reported on in this story is part of the FCFA UMFULA research initiative, a four-year project that aims to improve climate information for decision-making in central and southern Africa, with a particular focus on Tanzania and Malawi.

This article was written by Leonie Joubert as part of a series covering the science produced by various FCFA projects, and introduces some of the people behind it.