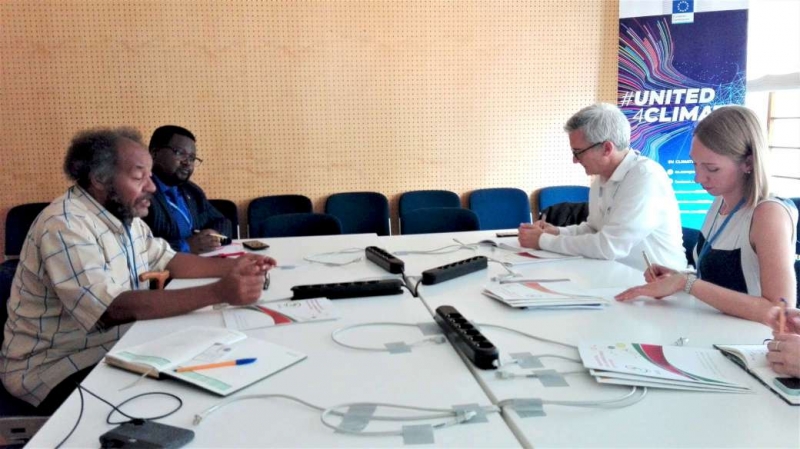 Augustine Njamnshi, Coordinator of the African Coalition for Sustainable Energy and Access (ACSEA) with Muawia Shaddad of Sudan meeting the EU delegation in Bonn

BONN, Germany (PAMACC News) - At the UN climate talks, Civil Society Organisations from the global north and south, have raised alarm on what they term as incoherence and exclusion of key stakeholders from the implementation of the Africa Renewable Energy Initiative (AREI).

At a meeting with the EU Head of Delegation, at the on-going climate talks in Bonn, Augustine Njamnshi, Coordinator of the African Coalition for Sustainable Energy and Access (ACSEA) said CSOs from both the global north and south are concerned with the direction of AREI, which he said has completely excluded key stakeholders from the process.

“As key stakeholders, we are extremely concerned AREI is almost taking a wrong direction—no information on what is happening and a total exclusion of all key stakeholders,” said Njamnshi. “We thought of engaging you as EU for we know that you remain a key observer and stakeholder of AREI so that you can take responsibility, and help to correct the situation.”
Njamnshi said the EU should not only be seen to play its observer role regarding projects, but also show leadership on governance of the project.

“The EU was actively involved at a meeting in Brussels at which projects were being discussed, so it is not right to say that the EU is just an observer when there are issues like what is happening where the initiative seems to have taken totally a wrong path, but then become active observers during project matters only,” said Njamnshi.

AREI is an Africa-owned and Africa-led initiative of the African Union. It aims at harnessing Africa’s abundant renewable energy resources to help achieve the Sustainable Development Goals (SDGs), enhance well-being, and sound economic development by ensuring universal access to sufficient amounts of clean, appropriate and affordable energy for all Africans.

As energy is the engine of economic development, AREI also seeks to help African countries leapfrog towards renewable energy systems that support their low-carbon development strategies while enhancing economic and energy security.

The Africa Renewable Energy Initiative (AREI) aims towards the installation of 10 GW of new and additional renewable energy generation capacity by 2020 and at least 300 GW by 2030. In so doing, the Initiative aims to ensure access to energy while addressing climate change.

AREI was launched at COP21 in Paris in December 2015 and immediately received strong international support from development partners who committed to mobilise at least $10 billion cumulatively to harness Africa’s renewable energy potential and expand energy access across the continent.

However, It was heard at a combined meeting of both global north and south CSOs held on the side-lines of the UN Climate talks in Bonn, that the initial administrative and implementation phases (2017 to 2020) of AREI have been marred with uncertainty and secrecy, much to the detriment of the core objective of the Initiative—people centred and decentralised energy systems to reach all Africans who lack access.

“Decentralised energy systems should not only be about decentralising equipment but also decentralising decision making systems. And AREI has a unique feature anchored on multi-stakeholder engagement especially civil society but this has not been the case,” explained Njamnshi.

And Jacob Werksman, EU delegation leader at the SB50 talks, acknowledged the concerns of the CSOs and pledged to bring them to the attention of the people directly working on the AREI at the European Commission.

“We will bring this to the attention of the people who are directly working on it to see whether, through the EU’s role as an observer, could help to sort the issues that you have raised,” said Werksman.
He was however quick to point out that the European Commission’s cautious involvement in AREI could be as a result of concerns from some African leaders who, at a high profile meeting, openly expressed concern that the was over playing its role in the initiative, and a urged for a to push back so that AREI, could, as was intended, be led by Africans.

“Thanks for taking the time to meet us,” said Werksman. “This is a high profile initiative. Although we are not involved in terms of the day to day operations, we know about it, we are interested and care about it because it was intended to embody all these principals. We are however also aware that there was a high profile meeting at which some of the EU donors present made a very overt effort to influence the initiative and there was an extreme push back from some of the African partners saying,‘you said this was going to be African led, we think you are overplaying your role, please push back’,”he explained.

It is important to note that Germany non-governmental organizations are supporting African civil society in its efforts to promote the AREI’s human rights-based, climate-compatible and sustainable implementation approach.

They are committed to ensuring that the demands and positions of African civil society are heard by Germany decision makers in particular. As one of the largest donors to the initiative, Germany is seen to have a special responsibility to ensure that AREI projects and programmes do in fact contribute to climate protection and sustainable development.