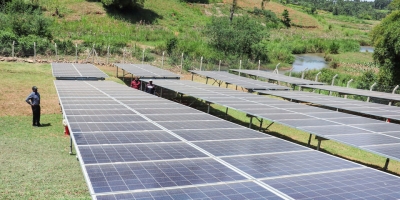 ACCRA, Ghana (PAMACC News) - The African Development Bank Group’s Annual Meetings in May will focus on the impact of climate change on Africa and the need for a just energy transition  on the continent, the Bank Group’s Secretary General said on Wednesday.

Professor Vincent Nmehielle spoke during a virtual press conference convened to brief journalists about the agenda of the five-day meetings, to be held from 23 to 27 May in Accra, Ghana.

Nmehielle said the theme, Achieving Climate Resilience, and a Just Energy Transition for Africa, was chosen to provide a framework for the governors of the Banks to share their experiences and engage in addressing climate change and energy transition challenges, as well as their policies and measures to deal with them.

“Governments will be able to show what their countries have done in this regard,” the Secretary General said. A key highlight during the Bank Group’s Annual Meetings will be a commemoration of the 50th anniversary of the African Development Fund, the Bank Group’s concessional lending arm.

The Annual Meetings will also serve as a precursor to the UN Climate Change Conference, or COP 27, which is being called the “African COP”, to be held in November in Egypt. Governments will once again lobby for the continent’s positions on climate change.

The Secretary General was joined by African Development Bank Acting Chief Economist and Vice President Professor Kevin Urama; Vice-President for Power, Energy, Climate and Green Growth Dr Kevin Kariuki; and the Director of the Agriculture and Agro-Industry department Dr Martin Fregene, who represented the Vice President of the complex. They answered questions from the over 80 journalists who attended the event.

Professor Urama emphasized the Bank’s role as a thought leader in Africa, saying the meetings would include three main knowledge events that would touch on topics such as building a digital economy, green jobs for youth and a special session on climate change that would include the launch of the African Development Bank’s African Economic Outlook for 2022 report.

The Bank officials fielded questions on a range of topics, including the Bank’s role in infrastructure development, Africa’s energy transition, and a $1.5 billion plan to avert a food crisis sparked by the war in Ukraine.

According to Urama, resilience was all encompassing. “The Bank will be focusing a lot more on infrastructure investments to build the resilience of countries, social resilience, economic resilience and also environmental resilience in general, including climate resilience,” he said.

Kariuki noted that the African Development Bank was no longer investing in new coal projects. “However, when it comes to gas, we do understand that Africa needs to address its energy poverty and in order to look at energy poverty, we need to look at all non-coal sources of energy…Therefore, from where we stand, as long as a gas project has been included in a country as part of Nationally Determined Contributions…then the bank will invest in those gas power plants,” he said.

Fregene said the $1.5 billion food plan would address immediate needs triggered by the ongoing conflict in Europe. The plan will support farmers with seeds and fertilizers in the next wet season which starts around October in the southern hemisphere. The Bank also has a medium- to longer-term plan to help countries build resilience, known as Mission 1 for 200, which will help farmers boost production to 100 million tonnes of food to reach 200 million people.

At the end of the session, Nmehielle urged journalists, as “partners and advocates for development,” to spread the word about the impact of the Bank’s work and to press their governments for the change they want to see.

“The Bank is a catalyst...The Bank exists to help regional member countries to achieve their socio-economic development,” Nmehielle said. “The Annual Meetings will be exciting. We look forward to seeing you in Accra,” he added.